Why are you so sexy? 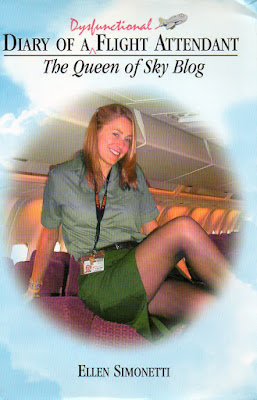 Several years ago I wrote a story for The New York Times about a flight attendant who was wing-walking on the dangerous side, that would be leading edge side of the blog-o-sphere. Ellen Simonetti

was your cleverer-than-average, blonder-and-taller-than-average flight attendant with a wicked sense of humor and a propensity in her blog, to refer to herself in the third person, (Her Mile Highness, being my personal favorite).

Then one day, Ellen made the mistake of perching her chassis on an airliner seat belonging to her employer and having her photo taken while wearing her uniform unbuttoned just enough to reveal a tiny sampling of her brassiere. She posted the photo as part of the blog which was a ground level view of her life

as Queen of Sky, working for Anonymous International Airlines and flying out of Bustling Base City.

As amusing as they were, none of her hijinks would have been worthy of a story in the Gray Lady, had Anonymous International not decided to fire Ellen and the truth emerged that all that stuff she wrote was about ... tada... Delta Air Lines.

We approach the end of the first decade of the 21st Century and that story sounds as prudish as life in the times of Hester Prynne, tell-all blogs being as ubiquitous as airline ancillary fees. But back in 2004, well, an employee just didn't pen lines about the bosses, the co-workers and the clients and push it all out on the web.

What hasn't changed is the innate sexiness of the airline business, and Ellen's little outing was really just one stop pretty far down a path that has been unrelentingly titillating since Alberto Santos-Dumont

's days in Paris. Hopscotching over the brothers Orville and Wilbur, brilliant (and even attractive from my perspective) but for purposes of this essay, providing the exception that proves the rule, our next stop would have to be the incontestably sexy early and mid-century aviation icons Amelia Earhart

As we stroll  into the sixties we find two stewardesses who wrote the memoir Coffee, Tea or Me

, and incited three more books and a movie based on their antics. 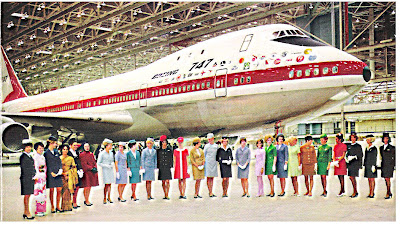 And is it just me, or is the visual metaphor equating shapeliness and style being used to good effect in this fabulous photo produced and distributed by Boeing forty years ago to showcase the then-brand-new 747?  The more things change, the more they stay the same. View this ad by  Virgin Atlantic and tell me I'm wrong.


Enough has been written about the covey of contemporary hotties who pulled fat out of the fire on New York's Hudson River in 2009 and half a world away on an Airbus A380 in Singapore earlier this month. (Great looking pilots, Qantas, but about that airplane...)
What I'm saying here is that the entire aviation enterprise is innately enticing and always has been. And for just as long this quality has been both positive and negative. Terrorists can't resist aviation for drama, and neither could assorted hijackers and bank robbers before them. Politicians can't keep their hands off the airlines either and that's been the case since the thirties when the most frequent thing flying was the U.S. Mail.

Mention air travel these days and lots of folks will say they're hot and bothered, alright, and not in the way I'm suggesting.  But we are good hot and bothered and bad hot and bothered at the same time. Aviation, captivating and thrilling is like the too-perfect prom date. Five o'clock shadow eventually forms, bouffant hairdo eventually flattens. The passion crests but never quite recedes.

Good thing, too. Queen of Sky has parlayed the allure that made her too-hot-for-Delta-to-handle into a project just right for Hollywood. Variety reports her blog-turned-book

will soon turn into a television series.  The self-deprecating Ellen is wont to describe her writing adventure as a "career ending blog." Wrong. Sex appeal like this girl's got, the intelligent, wise-cracking, irreverent kind, belongs in aviation. Whether she's flying the line or recreating it to feed the appetites of the rest of us who just cannot get enough of this heat-generating industry, I'm glad we haven't heard the last of Her Mile Highness.
Posted by Christine Negroni at 6:11 PM

Hey, Christine, 'twere ever thus. Harriet Quimby was a hottie; she glam-ed up aviation ca. 1911! (Pity seatbelts hadn't been invented.)

And then my husband reminded me about Howard Hughes. Yeah, unless of course I thinking of Leonardo DiCaprio's version of Howard...

Don't forget Katherine Stinson, who got her pilot's license in 1912 and was the first woman to loop the loop!
http://www.nmcentennial.org/katherine-stinson-otero.html

This ties in with the recent bikini mania in airline calendars by Ryanair, Mexicana, and the creative passenger, Corinne Thiele who opted in to a bikini at LAX.

In fact, I quoted from your article, with attribution of course, in my own piece, Virgin Atlantic sexy video sells seats.

I just wish that I could write as well as you. It must be in your genes, or jeans.