Can a Flight Attendant Go Too Far? Ask American Airlines. 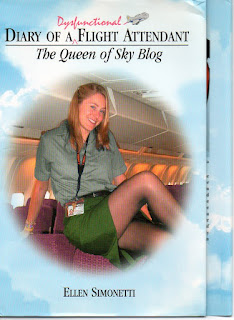 Several years ago, I wrote a story for The New York Times about Ellen Simonetti,who was telling all - albeit under a pseudonym - about her experience as a flight attendant with "Anonymous Airlines". When she posted a photo of herself in her uniform it didn't take long for the fliers who frequented her blog to figure out she worked for Delta Air Lines and shortly after that, Ellen was unemployed.

Delta may have felt the hard-partying, wise-cracking Queen of Sky as Simonetti dubbed herself didn't fit the image they wanted for their airline. They ought to be thanking their luck stars they didn't have Gailen David to contend with.

Ellen's barely-risque banter about the activities of an international air hostess wern't nothin' compared to American Airline's David, a gender-bending "sky steward" who has turned employer-bashing into a multi-media art form.

From his blog, dearskysteward.com to his Internet television channel, David took on his employer, no holds barred. In one seven-minute video episode, David describes how being snubbed by a premium-class customer would launch him on a flight-long campaign of revenge, how nightmares about dwindling in-flight amenities sent him into morning rants. "I wanted everyone to know how much I hated American Airlines and everything they had done to make my life a living hell," he says in the video, before coming to the realization that he better start treating the customers like they were the stars of the show and not him. (Smellin' the coffee, eh Gailen?)

There are similarities between David and Simonetti. Both flight attendants were intelligent observers of their industry and both felt the need to go public with the details of their employment in the formerly glamorous world of air travel. Both had a following and both ended up ticking off their employers and paying the ultimate professional price.  David was fired on March 14.

But there are differences too. Ellen is a woman, while David only dresses like one. Ellen's posts are clever and subtle. David's are neither. But the most significant difference is that Queen of Sky never publicly undermined her airline, never in fact, identified her airline.

By contrast, David accuses American's bosses of killing the carrier. Setting aside the fact that he may very well be correct, one has to wonder how any employee could possibly think middle-of-the-night-let's-all gather-in-the-galley-and-bitch sessions are appropriately posted for all the world to see.

The last time I saw such reckless disregard for the best-interests of one's own employer it was when US Airways pilots took out a full page ad in USA Today warning travelers that the airline was unsafe. One US Airways pilot described the action as the equivalent of "dropping a nuke on the company."

Gailen David's body of work suggests there's an approaching anarchy in the workplace, where anything anyone wants to say or do should be a-okay and the paychecks should keep on rolling in. David's firing says its not and they won't. For now anyway.
Posted by Christine Negroni at 10:15 PM