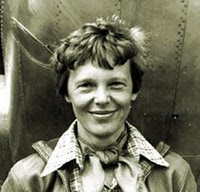 Its a good day to remember Amelia Earhart - a pioneering woman in many respects. But yesterday marked the 75th anniversary of her solo flight from Hawaii to North America. When she departed the military field in Oahu bound for Oakland, California, in 1935 she was the first to fly across of the Pacific alone. She flew a wooden Lockheed Vega at low altitude through winter storms twenty-four hundred miles and arrived 18-hours later. Earhart would set many records and break others before disappearing just two years later as she attempted to fly around the world in 1937.


There are plenty of reasons to reflect on this woman's accomplishments. Her life demonstrates how empowering passion and courage can be. By following her dreams Amelia Earhart has inspired many others to do the same.
Posted by Christine Negroni at 10:24 AM