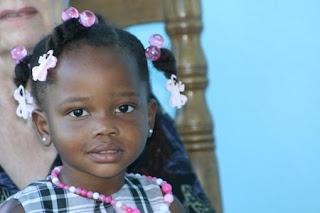 Immigration officials at the West Palm Beach airport seized a two year old Haitian child being brought into the United States for medical treatment on Saturday.

The child, Mishna Prezille was flown to Florida on a private plane operated by the missionary group, Air Mobile Ministries and was in the custody of two journalists who volunteer with the charity. She was to be put into the care of a Florida physician, but immigration officers told the group when they arrived that the child had an illegal visa, according to John Torres, a newspaper reporter with Florida Today, who was on the flight.
Marlin Moudy, the pilot who regularly works for the Florida-based charity, flew the plane into West Palm Beach International Airport. He said he examined the visa before departing Haiti. "I'm a pilot and I have to make sure these things are all valid." Mr. Moudy said the document he examined was a one year visa issued on August 16, 2009.
"She was screaming and hollering when they took her," Mr. Moudy said calling the atmosphere at the airport traumatic when federal authorities separated Mishna from her chaperone, a local television reporter Marci Gonzalez.
"They put her in a big SUV and took her away and she was crying."
Mishna was on her way to the home of Dr. Stephen Badolato, who lives two-hours drive from West Palm Beach and says he has power of attorney to provide for the medical care of the child. He volunteers medical treatment and guardianship to the Ruuska Village orphanage in Bon Repos, Haiti. Dr. Badolato said the power of attorney was with him at his home, not with the child. "It's horrible. I've been up all night working on trying to get her back," Dr. Badolato said. 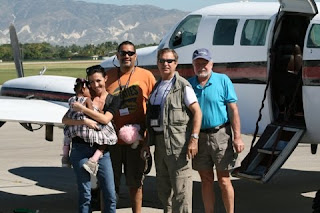 An official at the Department of Homeland Security said the problem was not with the child's visa but the authorization for her guardianship. "There was no proof of guardianship. He didn't have the documentation in terms of guardianship," the official said of Dr. Badolato's authorization.
Reached in Haiti Sunday, Joe Hurston, of Air Mobile relief said Mishna had surgery in the United States last summer and was in Haiti to visit her mother before returning to the U.S. for more medical treatment. She was at the orphanage at the time of the earthquake.
"This is a 2-year old girl with club feet. We had two journalists in the plane and another American Airlines captain and they were all held in the airport for 7 hours while being interrogated," said Mr. Hurston.
In addition to Mr. Torres and Ms. Gonzalez, Tom Garcia, an airline pilot and a state political candidate was also on the airplane. Mr. Torres said the baby and Ms. Gonzalez were inseparable. "She just took to Marci. She was hanging on her the whole time."
When the plane arrived, Ms. Gonzalez and the child were taken into the airport. The men were held on the aircraft by armed officers for six hours.
U.S. Congressman Bill Posey, who started calling customs officials after Mr. Torres contacted him by phone, said he was told that authorities were concerned because there was a report of a Haitian child kidnapped. A DHS official denies there was specific kidnapping but said the department is generally concerned that children entering the country "are placed with the proper people."
"I can't tell if it was handled in an appropriate way until I get the facts," Congressman Posey said of the airport snafu. "Obviously my staff and I have all the sympathy for the little girl but at the same time we must respect the rule of law. I'm not saying there weren't bad decisions made. That's our goal to get the details."
A DHS official said if Dr. Badolato produces documents proving he has the right to custody of Mishna, he would be able to take her from the children's home in Miami where she is presently being housed.
Like so much in Haiti, the Ruuska Village orphanage is in ruins and residents are sleeping out of doors. The director of the orphanage, Barbara Walker has arranged the adoptions of several children according to Mr. Hurston, who is taking care of their transportation out of the country. Mr. Hurston says the U.S. Embassy has promised swift processing of their visas. "We have 13 visas and making arrangements to fly them out tomorrow. Before they make this flight we want to make sure this travesty does not happen again."
Photos courtesy of John Torres Florida Today
Posted by Christine Negroni at 5:02 PM

Thank you for writing this!
-Marci Gonzalez