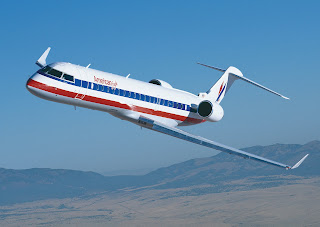 I'll grant that math was never my strongest subject, so correct me if I'm wrong here. But after reading the Federal Aviation Administration announcement today that it will fine American Eagle $2.9 million for failing to comply with an airworthiness directive, I got out my calculator to see just what this fine really represents. Transportation Secretary Ray LaHood's characterization notwithstanding, it doesn't sound so "stiff" to me. But first some background.


Over the past few years aviation safety authorities have issued a few directives to both the private and commercial operators of Bombardier aircraft regarding landing gear and gear doors. Suffice to say there have been problems.

Air travelers will be most familiar with the Bombardier, a 70 seat regional jet with a $35 million price tag. American Eagle owns two dozen of them and you'll see them in service at mid-sized airports and throughout the Caribbean.

After a main landing gear door flew off an airplane in flight, the F.A.A., in the summer of 2006 ordered all airlines operating the CRJ 700 to inspect the gear doors for cracks as well as loose or missing fasteners. Airlines had plenty of time to do this inspection which the feds estimated would cost about $65 per airplane. Nevertheless, according to the F.A.A. in 2008, American Eagle flew four airplanes with gear door problems on more than 900 flights. Even after discovering the flaws, American Eagle failed to fix the problems in the manner dictated by the directive.

On the one hand, we've got to give credit to the F.A.A. for fining American Eagle. What should be given the fisheye is the size of the penalty and that's where the math comes in.

For ignoring an order that airplanes with a safety problem be inspected and properly repaired and instead putting fare paying passengers on those airplanes more than one thousand times, American Eagle is being asked to pay what amounts to $2461 per flight.

That's why I'm having difficulty accepting Secretary LaHood's statement, "Airlines must know that if safety is compromised, they will be subject to stiff fines." When safety is compromised how about a fine slightly larger than the price of a first class domestic ticket?

It has been my experience that the F.A.A. proposes a fine but at the end of the process, the airline pays far less. I call your attention to the phrase "proposed civil penalty" and the concluding sentence in the F.A.A.'s press release. "American Eagle has 30 days from the receipt of the FAA's civil penalty letter to respond to the agency."

Earlier this month, the F.A.A. proposed American Eagle pay $2.5 million for misstating cargo weights on more than one hundred flights. This isn't like lying about a pound or two when visiting the doctor's office. Determining actual aircraft weight is critical to safety. When asked about this, a spokeswoman for American Eagle told the Washington Post, the paperwork wasn't accurate but the computer tracked weight used by pilots was. As for the F.A.A.'s proposed penalty, she called that "excessive and inappropriate."
Posted by Christine Negroni at 5:59 PM