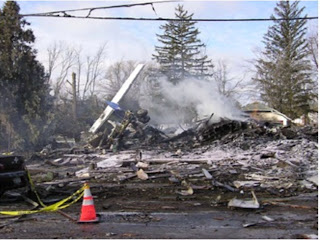 As the National Transportation Safety Board begins its hearing today into the cause of the crash of Continental Express flight 3407, I draw your attention to the list at the end of my comments, which I assembled after reviewing the accident database for all regional airline accidents in the United States over the past 10 years.


There were eleven accidents, eight of which included injuries or fatalities. During this same period there were three accidents involving large airline operations. (September 11 terror attacks excluded)

Regional jets and turbo prop aircraft account for about 40% of commercial aviation in the United States, but these carriers are involved in a disproportionate share of accidents. The carriers who contract for these services, American, USAirways, Delta, Northwest, Continental and the Federal Aviation Administration itself say regional airlines are held to the same level of safety as large airlines.

Continental was operating the Colgan flight from Newark to Buffalo under a lift agreement with Continental. "Prior to entering any agreement we conduct due diligence to make sure they comply with government and safety regulations," Continental spokeswoman Julie King told me after the Colgan crash, "But because they are a part of the oversight system, the F.A.A. is really their oversight."
Some of these issues are expected to come up at the hearing which is being held just two weeks shy of the first anniversary of the crash. That the board will examine not just the factors that directly contributed to the Colgan disaster, but those that haunt the regional aviation industry in general is a good thing.

Make no mistake there is a larger problem.
List of regional airline accidents since 2000
Posted by Christine Negroni at 7:09 AM

It's true that there is a larger problem here, and us pilots have known about it for a long time. I hope we learn the right lessons from these tragedies.