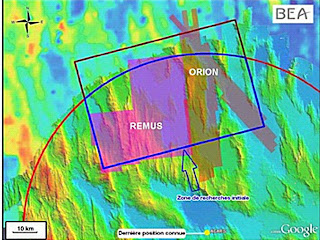 A runaway mini-sub temporarily halted progress on the French government’s search of the Atlantic for the black boxes from Air France Flight 447. The remote operated underwater vessel, the Remus, is part of a team of recovery watercraft hired by the French as they investigate last June's crash of an Airbus 330.


Last Friday, the Remus mini-sub surfaced and moved 62 miles before it could be recovered and returned to the search site.

The French aircraft accident investigation bureau the Bureau d’Enquêtes et d’Analyses is twelve days into its latest effort to find the flight data and cockpit voice recorder from the jetliner that disappeared mysteriously on a flight from Rio de Janeiro to Paris June 1, 2009. Two hundred and twenty eight people were killed.
The BEA reported today that the team of two work ships, the 260 foot crane equipped Seabed Worker and the 230-foot supply and load-line vessel the Anne Candies, 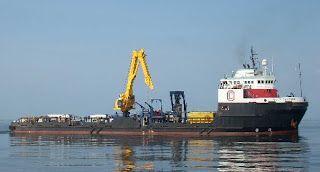 three remote-operated subs and a sonar tow has accomplished a search of 1800 square miles of the Atlantic.
In addition to the delay resulting from the runaway sub, the agency reported rain and stormy weather but good search conditions.
At the time the jetliner fell into the ocean, it was traveling at an altitude of 35,000 feet and was too far from land to use radio communications. A satellite system on the aircraft designed to report certain maintenance and aircraft information to dispatchers on the ground, sent several error messages.

Investigators seeking to discover what went wrong, have little to go on beyond these communications and some of the wreckage that has been found. Their eagerness to find the flight data recorder that documents the plane’s flight information and cockpit voice recorder detailing the crew conversations can be seen by the amount of time and money that has gone into the search of the Atlantic. Before this latest effort, an estimated $40 million had been spent by the governments of France, Brazil and the United States.
The crash has prompted calls for the use of new technology to keep airplanes in communication with the ground even on flights operating over remote areas. As I reported in an article in The New York Times, last month, European air safety agencies sent a letter to the International Civil Aviation Organization asking that the international body mandate that commercial airliners regularly send basic flight information such as heading, altitude, speed and location to a receiving station off the airplane.
In an interview last month with AirDat, a company that equips airliners with satellite systems to transmit meteorological information, Jay Ladd the chief executive told me the kind of information useful for investigators of the Air France disaster could be obtained using weather reporting systems already deployed.
“If we had our typical sensor on the plane, as it encountered turbulence, we’d be getting a rapid stream of information and we’d know where the plane was, we’d have an exact position and altitude for that plane when it last recorded data.”
Ladd’s company is not the only one looking at ways to incorporate on airplanes, the kind of high tech solutions already in use by teenagers twittering about their every activity.
Mr. Ladd told me, “We would like to be pro active and start tracking airplanes, even without ICAO intervention.”
Posted by Christine Negroni at 1:31 PM