I’ve sent my share of criticism in the direction of the Federal Aviation Administration since writing my book Deadly Departure about the crash of TWA Flight 800. But in today’s New York Times, there’s a startling account of federally documented safety lapses at the Upper Big Branch mine in West Virginia, leading me to believe air travelers have it good compared to coal mine workers.

The story, written by Dan Barry, Ian Urbina and Clifford Krauss reports that workers at Upper Big Branch, the site of the worst mine disaster in 40 years, “said they did not dare question the company’s safety practices, even when asked to perform a dubious task.” On April 5th, 29 miners were killed in an explosion at the mine.
Years ago, an aeronautical engineer told me that in contrast to commercial aviation which is subject to intense federal scrutiny, mines are practically unregulated. I was reminded of that over the past weeks reading about the Upper Big Branch disaster. I can’t imagine any airline being allowed to operate with violations like those cited by the Mine Safety and Health Administration and detailed in the Times story.
These days the buzz term in transportation safety is “just culture” - establishing a non-punitive approach to reporting and investigating errors and behaviors. Just culture recognizes that accidents are largely the result of blameless mistakes.
Even now, I’m working on a story about how demonizing pilots like those on Northwest Flight 188 who overflew their destination, and the Colgan Air pilots who mishandled a stall and crashed in Buffalo last winter fails to get at the root causes of pilot error. Recognizing that every accident is the result of a number of contributing factors is critical.
The public fascination with aviation disasters keeps pressure on the F.A.A. to constantly refine an already high level of safety.
That’s clearly not the case in mine safety and I can only surmise that’s because the there-but-by-the-grace-of-God-factor is missing. Everyone can imagine themselves in an airliner screeching toward disaster. Few will ever be anywhere near a coal mine.
Nevertheless, mine workers deserve the same level of federal protection. That the Upper Big Branch mine was on a collision course with disaster is obvious. 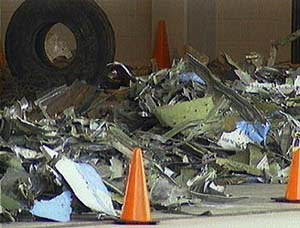 Which leads me to suggest that those in charge of assuring the safety of mine workers take another lesson from aviation - when behavior is egregious consider criminal prosecution of the corporate decision makers.
The precedent was set with the aviation maintenance company, SabreTech following the May 1996 in-flight fire that caused the crash of ValuJet flight 592. One hundred and ten people were killed.
After investigators determined that SabreTech illegally shipped oxygen canisters in the cargo hold of the DC-9, federal prosecutors charged executives of the company with murder and manslaughter. SabreTech ultimately plea bargained and agreed to pay compensation to the National Air Disaster Alliance, an air safety advocacy group.
Bringing criminal charges following an aviation accident is practiced in some countries, uncommon in the United States and frowned upon by the International Civil Aviation Organization and safety specialists. That the practice remains controversial is a good thing because it encourages judicious use of this exceedingly heavy club.
But from everything I’ve read the bosses at the Upper Big Branch mine have shown a reckless disregard for the safety of workers. They wouldn’t be allowed to get away with it at thirty-thousand feet. It is just as criminal below ground.
Posted by Christine Negroni at 1:24 PM

Nice post on aviation safety; I'll be curious to see your story on the "Just Culture." You might find "Whack-a-Mole: The Price We Pay for Expecting Perfection" to be a useful resource; it's written by the father of the Just Culture, David Marx. www.whackamolethebook.com