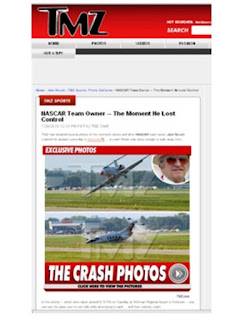 NASCAR team owner Jack Roush may have been attempting a go-around at the Oshkosh airport when he crashed the airplane he was piloting on Tuesday evening.  “He attempted to do a go-around at the last second and was unsuccessful,” is what I was told by a source at the air show, while covering the story for the Wheels blog of The New York Times.
This account jibes with what Flying magazine senior editor Robert Goyer told me.  He saw the approach of Roush’s twin engine Beechcraft but lost sight of the plane in its final moments as it flew behind some tents. “The airplane was flying very slow and it was fairly high off the runway,” he said. The plane was configured for landing, gear down and flaps extended but he noticed the plane was “being maneuvered.”  Robert said this is what “got my attention.”
The crash was captured in telling detail by a photographer who has made the photos available to the website, TMZ.
Another eyewitness, Mike Hargrave told a local television reporter he saw the plane turn and begin the approach the airfield, but the plane seemed to be flying too slowly. He told his companion, “I think that plane is stalling” but by then the plane had turned sideways, its wing hitting the ground first and then cart wheeling. 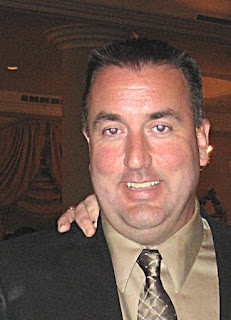 My friend Darren Gaines, a private pilot and air traffic controller has worked the ballet of Oshkosh’s twelve-thousand  arrivals and departures at  AirVentures past. Today he gave me the startling news that there’s a crash a year on average at Oshkosh, and that every year there is discussion about revamping the ATC procedures.
“It works pretty well if you are going to have this kind of volume and pilots are sharp and controllers follow their guidelines it should work fine,” he told me this afternoon from Oshkosh.  “When you get someone who is not proficient or there’s lack of experience on the controller’s side, or the pilot’s side that could be a bad equation.”
No one is suggesting Roush was not capable of making the landing. Two pilots I spoke with today who know him described him as an “accomplished pilot.” But Roush was not comfortable with something as he approached runway 18 last night and it appears he wanted to abort the landing and try again. The controller cleared him for a go around, but it was too late, the plane was already on the ground.
That Roush was in another airplane crash in 2002 has been well-reported, but the details of that accident have not. Here’s what happened. Roush was celebrating his 60th birthday by flying a friend’s lightweight experimental AirCam at low altitude over a lake in Alabama. He failed to see a power line and flew into it. In an interview with Flying the former editor-in-chief J. Mac McClellan wrote, “His last memory, before waking up in the ambulance, was seeing the wire approaching at the last second and trying to duck out of the way.”
That’s more than Roush told investigators, though. In a letter to the National Transportation Safety Board, Roush reportedly wrote, "I have no recollection of the accident nor any other incidents which occurred on April 19, 2002."
With his hands up to the elbows on both wheels and wings, Roush is a bi-modal celebrity, and this accident at the mother of all general aviation events will keep half a million attendees talking. If he forgets any detail of what happened to him on Wednesday night, there are more than enough folks able to remind him.
Posted by Christine Negroni at 7:32 PM

No doubt a go-around would have been the best move, but whether or not that was the case is going to be pretty simple to figure out.

If the engines weren't producing full power or being commanded to pull full power with the thrust levers full forward, they weren't trying to go around.

They're lucky they weren't killed, but swept wing airplanes don't tolerate the same kind of slow speed highjinks that propellor airplanes do when they get slow.

Again, they were both way lucky this time.

Rob, You are correct to mention the engines. You remind me of something I failed to include in my original post and that is that witnesses said engines sounded as if they were running full power. Mr. Roush is indeed blessed.