OK, so I am a mom, four times over actually, so that puts my recent comments on Portland's KPAM radio show in perspective.

This ongoing dispute between airlines and their customers sounds familiar, too familiar, like the sound of siblings fighting. What I don't hear is the sound of either side trying to understand the position of the other.


You can hear the entire show this weekend here, but in summary,  here's a common-sense mother's approach to remedying the problem.

You board an airplane that will take you in hours to places that used to require weeks or even months to access. On this journey you and your possessions will be protected from the elements, you will be housed in relative comfort, a trained professional will take care of your immediate needs and protect you in an emergency. But that emergency is extremely unlikely to happen because - don't stop me even though I know you have heard this before - commercial air travel is exceedingly safe.

You'll be able to get where you want to go day or night, any season with only the most extreme weather conditions interfering with your plans. In short, commercial aviation gives you safe, convenient, access to the world. 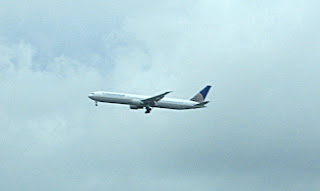 This is a blessing.

Yes, a lot of the bells and whistles are gone, you're going to pay to check your bags, your snack, your pillow, even your place in the line to board the airplane. Yes, the flight crew may be grumpy, and your fellow passengers grumpier. But here's the fact, oil prices have quadrupled over the past quarter century, while the price you will pay to get on that plane is just about the same, in some cases less. How do you think the airlines make that happen?

I've seen this quarter's revenue numbers. Many of you are back in the black. Now that there's a little financial wiggle room, I'm going to suggest where you would be well advised to throw a little cash.

You spend millions on creative marketing slogans, producing delightful advertisements to convince your customers that your skies are friendlier than the competition's. How about a clever campaign that explains to airline passengers how cut-rate fares affect the rest of the operation? The vast majority of us are reasonable and understanding. Speak to your customers. And while you're at it, speak to your employees, too. Then listen. That goes a long way.

Southwest Airlines has more than one million followers on Twitter. Last year, Alaska Airlines invited aviation geeks to visit the airline in Seattle and tour its flight simulator.  These airlines are working to bridge the gap. Need I point out the difference between these efforts and the kind of behavior that creates You Tube heroes like Dave Carroll of United Breaks Guitars fame?

There are a number of factors that are turning the relationship between airlines and passengers rancid and just as many ways to turn the ship around. It will take time and it will take commitment.

But in this mom's opinion, the only alternative to working this out between yourselves is outside interference. It won't be a sensible, forced time-out until you're ready to make up, either. No, it will be in the form of new laws emanating from Washington.

If  past is prologue, these laws will certainly make the situation more complex and more expensive, but they are unlikely to make it one whit more pleasant for passengers or airlines to fly.

Posted by Christine Negroni at 1:50 PM

Christine,
The world post-airline deregulation is certainly different in many respects. However, the old axiom that, "You get what you pay for" applies to the airlines in every area, whether that be pilot qualifications and training or maintenance. For a moment think about the poor maintenance at Southwest and American that resulted in big $$ fines for those airlines. Cracks in the wing spars, not following FAA maintenance mandates are the two things that immediately come to mind. What about the disasters those could have caused? While you're at it, also think about the items we don't know about--the maintenance shortcuts taking place in the foreign locations where this work is farmed out and other non-adherence issues. You want a cheap airline seat, then you get what you pay for. Under deregulation, the bottom line is the bottom line for EVERYTHING, including flight safety. The public is being sold a crock about flight safety and is buying it, all in the name of saving a dollar.

Good points all. Thank you for contributing to the dialogue.
Christine

plz link my blog in your blog