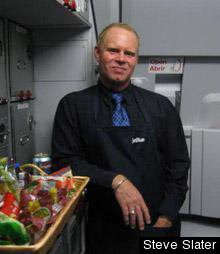 What’s the difference between an airplane engine and the folks onboard?
The engine stops whining when the plane is parked at the gate.
This is true for passengers and crew members alike. And if you don’t believe me, just take a look at JetBlue flight attendant Steve Slater, the mother of all poster boys for air travelers’ frustration.

Ok, two decades as a television broadcaster make me sympathetic to the concept of putting a human face on an intangible problem, but could the symbol of everything that’s wrong with the airline industry have come in a more perfect form than Mr. Slater?
“I can’t condone what he did, it was unprofessional and illegal,” says my friend, Patrick Smith an airline pilot who writes the column Ask the Pilot for Salon. “But at the same time he’s become sort of an instant folk hero, having channeled this fantasy that I think a lot of flight attendants may have.”
Wait, let’s not stop with flight attendants. Who among those who travel by air hasn’t felt a similar desire to unleash a few profanities and then take a premature exit to the terminal while all the other cattle in the car wait for prodding from the minders?
For the most part, passengers don’t log the kind of hours flight attendants do. We get to decompress after the stresses of air travel. We bore our friends with our latest airline horror story then we man up and move on.

Pilots log the hours, but they too are in a better situation than flight attendants, safely shut tight in their locked cockpits and sequestered from the hostility back in the cabin.

But consider the humble flight attendant.
“They’re on the front lines so they bear the brunt of immediate frustration,” said Dan Rose, an aviation lawyer at Kreindler & Kreindler, who says with some frequency he receives calls from airline passengers so fed up with the experience they want to sue somebody.
“The industry is so competitive in respect to costs that a lot of the niceties of air travel have gone away.” (I didn’t ask Dan which niceties still remain, though I probably should. I think we’d all like to know.) “Everything is getting surcharged from bags to potentially bathrooms, there’s no emphasis on service as a general matter so all these things in the aggregate add up,” he told me. “Plus, you’re in a confined environment; you’re in a tube, not a cruise liner.  All these factors come together to create a unique environment that fosters this kind behavior.”
One can’t argue with the logic.
I’m not a worrier by nature, but lately, I have been troubled by the frightening resentment building between passengers and airlines. “What,” I wonder “might be the fallout from this constant ratcheting up of hostility?”
Now I think I know and I am relieved.  By becoming a modern day Howard Beale, Slater, the baby-faced, blond who sports a smile even while being led away in handcuffs has bridged what seemed unbridgeable, uniting in sympathy the people who fly and the people who work for the companies who fly us.  It’s a golden moment, a miracle really, a gift.

What do we do with it?
Posted by Christine Negroni at 1:12 PM

Briliant article, and true. Enjoyed it so much :)

It's clearly obvious through Slater's now infamous "smile while doing the perp walk", he relished at doing something I am sure every flight attendant would love to do once in their career. Getting pure satisfaction vis-à-vis dropping the f-bomb to a rude passenger through the PA system.

It goes without saying that this would have been a different story had it happened at 30,000 feet. Then, he would have joined the ranks of such air disasters such as the "shoe bomber" and not his current status of a social media hero.

I'm also placing bets now. Seven years in the can? Not likely. I say 3-5 with probation, anger management classes and keeping 300 yards away from anything that resembles a slide.