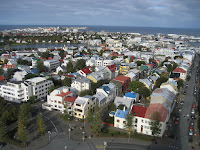 The week-long closing of European airspace due to ash from Iceland’s erupting volcano was very likely unnecessary beyond the first two days, a number of experts told the Atlantic Conference on Eyjafjallajokull and Aviation meeting at Keflavic Airport in Iceland this week.

Dr. Ulrich Schumann director of the German Aerospace Center Institute of Atmospheric Physics (DLR) said, “On April 16th and 17th the ash cloud was clearly visable, "but probably by Sunday was gone.” Dr. Schumann flew a number of test flights to gather data on the ash cloud and concluded that concentrations were mostly below levels that would threaten safe flights.
“The closures were disproportionate to the actual safety risk; disruptive followed by chaos and exposed weaknesses in decision making,” said Ulrich Schulte-Strathaus Secretary General of Association of European Airlines. “Political safety exulted over aviation and consumer safety.”
That it was a political decision to close European airspace, grounding 100,000 flights and affecting 10 million passengers was disputed by by others at the conference, including Daniel Calleja-Crespo, Director of Air Transport for the European Commission.
"Weather concerns indicated the situation was there to stay," Calleja said, insisting during this unprecidented situation,  "Safety had to be preserved."
The 280 conference attendees work in  aviation, science, geology, meteorology and volcanology and have an important perspective on the ash crisis. But they remain divided over how it was handled and what should be done in the the future. One point was incontestable: The economic impact was nightmarish.
Geoffrey Lipman, Special advisor to the UN World Tourism Organization explained that commercial aviation has an “entire eco system of its own.”
Lipman’s use of the word "tourism" goes far beyond sunny beaches and umbrella drinks. “Tourism implies all the economic activity that results" when people do anything, anywhere away from where they live. Lipman said the dollars lost during that week in April is estimated at $5 billion.
“This is what happens when airlines and regulators haven’t got their act together,” Lipman said and he urged everyone there to, “look outside your silo.”
Getting outside the "silos"  will be challenging. Sides are already hunkered down.
In the future, airlines want the right to make their own fly/no fly decision. Tom Hendricks of the Air Transport Association told me in an earlier post that airlines are in the best position to judge when it is safe to fly. But over the past few days a number of people told me confidentially that idea is a non-starter. Regulators are not going to ceed their safety oversight responsibility.
Before the end of the conference Thursday, Jorg Handwerg from the German Air Line Pilots' Association in Frankfurt said he was worried that if the decision to fly was ultimately left to airlines, pilots might feel pressured to fly.
"We’re not willing to take all the risks on our sholders or to fight with employers because we're not willing to fly. The pilot is responsible so there must be a limit as to what flights you are allowed to take. Making that decision is the role of the regulator," Handwerg said.
This stalemate should not overshadow the progress that was seen this week. The world's most experienced scientists and volcano experts are focusing on Eyjafjallajokull and Katla, Iceland's other, larger, active volcano. And while trying to predict the route volcanic ash will travel remains frustratingly difficult, the global aviation community is listening - big time - to what they have to say. More about that in a future post.
Posted by Christine Negroni at 11:00 PM

How very true! This is exactly what happens when people forget the definition of safety! Safety is NOT about eliminating accidents, but about managing risks...some accidents will happen, simply because they are, well, accidental! The bottomline always is: Were the risks properly understood and managed? Were adequate resources deployed? Were they appropriate to the risk assessment?

In this case, unfortunately, this was not the case. Governments and regulators went in a knee-jerk reaction and set in motion as chain of events that was irreversible!

So what do we learn from it? Leave the business of risk management to experts in the field! Just doing something is NOT safety...safety means doing the RIGHT thing at the RIGHT time after proper understanding of the risks and possible consequences.

Take Care and have fun while you are at it!

Samir, My friend Pete reminds me that a good outcome is not proof of a good decision. Unfortunately, most people measure safety in just that way. Thanks for your insight.
Christine

Hello All,
Thanks for the nice quote ;-)
The decision to close airspace at that time was consequent and correct. Why install rules, if one, in case they are touched by the events, don't want to comply despite having any new information. The "wrongdoing" happened long before by neglecting that the contingency plan might be too strict and therefore the consequences could be too drastic. If one hears that since 20 years, according to IVATF, the problem of not getting any information about safe ash levels from the manufacturers did not really bother anyone, the outcry of the industry now, must be seen in a different light. Still the conference showed that especially the engine manufacturers are not willing to take money into their hands and test - as fast as possible - for valid, science proven limits. They only take off the biggest pressure by installing a mere surmise value of 2 mg/m3. If the regulators don't force them to test for ash resistance the believe in them will probably dissolve like the magma of a vulcano outbreak into smoke and ash. How did a colleague of mine say to me: "You certify - then we fly!"
Jörg Handwerg,
Member of the board, Spokesman
German Air Line Pilots Association