Women in Aviation We're Dancing as Fast as We Can

It was a phenomenal transformation from wild debauchery in the shadows of Boston's glittering skyline on Thursday night, to the buttoned up, proper-lady executives in the ballroom of Boston's Taj Hotel today. Okay, both characterizations are slight exaggerations. Still, I'm here to say, the gals of the International Aviation Womens Association have the secret to balancing playfulness with power. 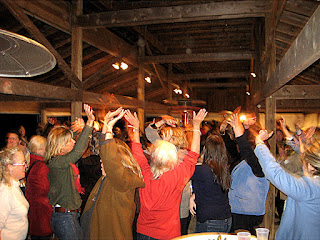 The clam bake was sponsored by Fed Ex, so let me direct this thought to them right now, "Holy smokes, you sure know how to throw a party!"

At last night's get together at Thompson Island in Boston Harbor, boldfaced aviation names tossed back the steamers, the lobsters, the champagne and the pie, then worked it all off with an exuberant, marathon-length dance session, that had the few men in attendance (bartenders and wait staff) using both hands to haul their jaws up off the floor.

I was there with Missy Cummings, a human factors professor at MIT. Missy invited me to speak to her students about the concept behind a book I'd like to write called Flying Lessons. So we were coming off an interesting afternoon anyway. But I did get the impression that female former Navy fighter pilots, turned eggheads don't get too many opportunities to shake a leg with some of the top women in aviation. (Nope, I'm not going to print their names here, what happens on the island, stays on the island)

By this morning, though, the bump and grind had been replaced with the daily grind, which in aviation is a constant effort to figure out the future based on a technological present that is outdated by the time the sun goes down.

Its thrilling to see so many smart women are thinking about these challenges. For example, Jamie Jewell and Katy Padgett communications executives for aircraft engine manufacturers CFM International and Pratt & Whitney respectively joined journalists Rachel Layne of Bloomberg and Andrea Shalal-Esa of Reuters in a panel discussion about whether social media has essentially eliminated the need for traditional journalists. If companies can reach out through Twitter and Facebook and draw an audience to their own websites, they can control their message in a manner unthinkable just a few years ago. What does that mean for journalism?

I was interested in this discussion because of my oft-stated feeling that aviation has become the industry the public loves to hate though for the record, it is airlines and corporate aviation that are the subjects of so much of the public's ire. Regardless, if this idea of speaking directly to the public, without the pesky interference of reporters and editors proves true, its a powerful tool for airlines.

Looking around at the crowd, last night and today, I can't help but be impressed by how much mental energy is being invested in this increasingly complex thing we love called aviation. We're dancing as fast as we can, trying to create a future that accommodates what we still can't even imagine.
Posted by Christine Negroni at 4:39 PM