Fuzzy body contours and a clear picture of conflict 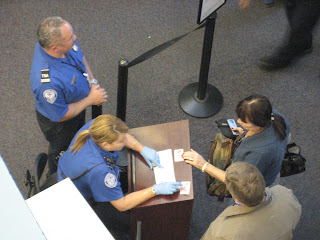 A few thoughts on the ire I've stirred by accusing my fellow Americans of being cry babies. The response from so many people whose opinion I value (Don, Frank, Brian...) had me doubting how well I expressed myself in my previous post.


Let me make this clear. I am not a proponent of full body scan screening. Neither do I oppose it. The best summary of my attitude comes from a Tanya, a commenter on Patrick Smith's Ask The Pilot column this week in Salon. She wrote...


I can't figure out whether we're having a collective adolescent moment, ("you can't do that to me!")--blended with Puritanical modesty -- or legitimate push-back. I mean, where were all these passionate defenders of civil rights when we started torturing other human beings? NOW they're upset?


Where, in your opinion, is a good place to put the line between safety, and privacy? What actually can help save lives? How do we factor in the very real desire to save lives, even if it means some sacrifice/inconvenience/ooginess?" (Ooginess? Search me, its her word, not mine.)


Like Tanya, what I find offensive about this debate over advanced imaging technology is the nagging sense that despite all the talk of constitutional rights and the right to privacy, there's something far more self-serving going on. Because she's right, if so many Americans were preoccupied by threats to the principals of our founding fathers, what about our role in the torture of terrorism suspects? And worse, where the heck were these civil rights advocates after 9-11 when the Bush administration's Attorney General John Ashcroft went about rounding up Arabs and Indians right here in the U.S. and throwing them into detention centers as material witnesses? 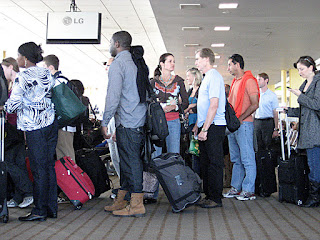 But coming back to the present, I'm no legal scholar but the constitution never granted us the right to fly. We make a choice to travel by air. We purchase airline tickets in full knowledge of the restrictions that go along with it. These days that includes paying for checked luggage, squeezing into cramped seats and agreeing to levels of security deemed - rightly or wrongly - necessary for public safety.


In Patrick's column, he concludes he also has ambiguous feelings about airport security from the user perspective. Whether its "resistance against TSA" as Patrick calls it, or Tanya's "push-back" (or my less than sensitive characterization of whining) there are larger questions. Patrick writes that the heart of the matter isn't the pat downs.


"It distracts us from asking important questions about the agency's approach to security overall."


Yes. Right you are, Patrick. Let me beg John Pistole, the TSA chief to be the leader here. Don't cave on the small stuff and leave the larger issues unaddressed. It is not possible, not logical, not sensible, not safe to approach security with the idea that we are all potential terrorists until the hourly workers at the check point prove otherwise.


Effective counter-terrorism starts at the top. Or as Richard Bloom, the Embry Riddle Aeronautical University professor explained to me last month and expanded on even more eloquently in a New York Times blog post last year; security is multi layer process; heavily reliant on intelligence gathering and analysis of how our transportation systems work, analyzing global trends and risks and keeping an eye on the rest of the world and our role in it. But of course, Mr. Pistole, you already know this. In our heart of hearts, we do too.
The most thought-provoking thing the TSA chief said lately, however, is that "security is a shared responsibility" and he doesn't mean shared among government agencies. He's talking about all of us.


So can we please, Please, PLEASE, put the kabosh on our national inclinations to demonize the government, hunker down into the rightness of our position and paint the controversy as an irreconcilable us-versus-them conflict? If we could only.....we'd have so much to be thankful for.
Posted by Christine Negroni at 11:25 AM

" if so many Americans were preoccupied by threats to the principals of our founding fathers, what about our role in the torture of terrorism suspects?"


Just a thought - could it be that fear paralyzed dissent in those days and now we're slowly emerging from the nightmare of 2001-09 and reasserting ourselves? Seen from that light, I would encourage any appropriate dissent and outrage at the violation of civil liberties. We can start small and work our way to the big things like torture and indefinite detention.

Oh David, I love your glass-is-half-full optimism. Yes, let's start small and promise that when the civil rights violations target the less-privileged, we'll be champions for them like we champion for ourselves. We can start in Arizona where anybody the police think may be illegally in the US are subject to search. Great holiday to you David.

They came first for the Communists,
and I didn't speak up because I wasn't a Communist.

Then they came for the Jews,
and I didn't speak up because I wasn't a Jew.

Then they came for me
and by that time no one was left to speak up.

isn't it a kind of "glass half empty" attitude when you try to justify nonsense controls at airports with the (completely correct) note that people didn't cry out because of other injustices? How can you justify one thing bad with you didn't complain about some other thing bad?

Security control can never create 100% security, we all know that. So it is a compromise between security gain and annoyance, time, money etc. What is to criticise is that a lot of measures create almost only annoyance with almost no security improvement, just to create the impression of safety.

The worst "joke" the american government recently forced upon people is that it is not allowed to stand in groups (in front of the restroom for example) during the flight! This brings absolutely NO increase in security at all. It only helps to keep up the impression the government would do "something". So they don't have to do the things which really need to be done but are much harder and costlier to do.

There is no need to check pilots for a nailfile, because you give him the plane into his hands afterwards! What harm can a pilot do with a knife? Hold it to his own neck? No need to. So you have to check him first by an intelligence agency if he is trustworthy and then you need to give him an ID which is really worth the name, for example with biometric data on it.