Pilots take their security complaint to the right folks 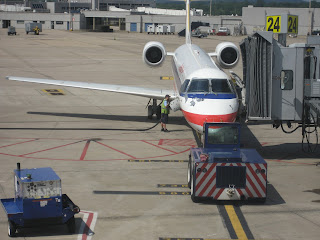 I won't claim credit, but I will praise pilot Dave Bates of American Airlines for taking pilot complaints about whole body scanning to the right place. He did not take on lowly TSA officers just trying to do their jobs like ExpressJet pilot Michael Roberts did at Memphis International Airport last month.


In a letter to the administrator of the Transportation Security Administration, the president of the Allied Pilots Association, American's union, explains that pilots in uniform find the process of undergoing "pat down" security checks demeaning and he asks that some accommodation be made for a private pat-down for pilots who refuse the controversial full body scan.

Hurray for Capt. Bates for doing what so many other pilots have only grumbled about and making a clear case to the proper officials about the unique situation of professional flight crews, who must deal with the time and inconvenience of airport security more frequently than the rest of us. He also explains the flight crews' health concerns over the additional doses of radiation from the backscatter imaging systems. You can read more about Capt. Bates letter here and what he's suggesting to fellow American pilots here. But before you go, let me opine just a little longer - after all it is my blog. 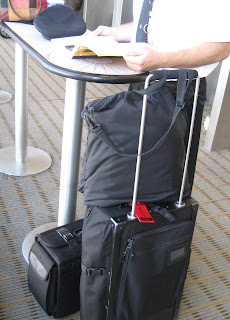 Pilots often make the point that treating them as security risks is senseless, considering they are the ones about to take command of  all these "protected" airliners.  What's overlooked in this argument is that giving pilots a pass through the security check point opens the possibility that someone could scoot through masquerading as a pilot.


Don't discount the possibility without considering that on Tuesday, a pilot for AirTran reported that his bags went missing at Orlando International Airport.  Whether he was packing a spare uniform is uncertain, but he was packing heat. The pilot was part of the Federal Flight Deck Officer program and his weapon was stolen along with his luggage according to a story in the Sun-Sentinel newspaper.


Conscientious as they may be, pilots do occasionally get separated from their possessions. As part of a highly-controversial security program in Israel, the government issued individual identity cards to all pilots who will be flying into Israeli airspace.  I reported some of the issues involved in this plan for The New York Times in July. Thousands of cards were issued and just as quickly, some of these cards went missing.


All of this is to say that as ridiculous as it looks, sometimes the belt and suspenders approach makes sense. In the safety world we call this redundancy.  Does that mean pilots and flight attendants concerns should be ignored? Not at all.


I'm praising Capt. Bates for taking a measured, meaningful approach to finding satisfactory solutions. But I'm also apologizing to Michael Roberts the fed-up ExpressJet pilot. Some of the credit belongs to him for inciting a publicity storm by pushing back at the security gate in Memphis.
Posted by Christine Negroni at 2:01 PM

"He did not take on lowly TSA officers just trying to do their jobs like ExpressJet pilot Michael Roberts did..."

Her point is well taken. I agree, and I've stated as much in my own articles, that the front-line TSA guards are just doing their job, and large-scale change needs to be initiated from much higher up the chain.

But just the same, these are the people the public has to deal with, and I don't believe they deserve a free ride, especially when they are rude and confrontational. There's nothing wrong with a little grassroots protest at street level. Things can trickle up just as they trickle down. And Roberts wasn't "taking things out" on anybody; he was standing up against a wasteful and degrading procedure. That's an important act.

Meanwhile if you want a laugh, here's an account of my own recent run-in of sorts with TSA policy...

your article here really shows some important points in the discussion.

Actually the checks what a pilot takes with him on board indeed are completely useless! If I want to crash a plane I don't need anything but my hands and fortunately they don't take them off me - yet ;-)
If I take a knife with me is completely irrelevant because what do they expect me to do with it ? Cut myself?
Your argument that Pilots need to go through the security control because someone could slip through doesn't really fit. Identity checks are something different from scans at the airport. Even if I go through the bodyscanner I could be someone with a false ID so the answer to that problem should be to create IDs which are copy-safe for example by including retina scan data or similar. Additionally Pilots need to be checked regularly for their background by the intelligence agencys. Once you know that a person is not a threat and you know at the Airport that he definetly is the person who he claims to be, no additional checks are necessary.

Taking Guns into the Cockpit is in our opinion completely wrong as well. On the one hand they take away a bottle of water and then you can take a Gun??? The chances of getting out a Gun in time, when a terrorist who enters the cockpit, knows you have one, is unrealistic.
The chances that you shoot yourself while playing around is probably higher than being able to safe a plane. We already had a hole in the hull because of gun a accidently going off in the cockpit.
The chances it gets stolen are obviously there as you showed as well.

The "shoes and belt approach" is not the smartest approach and does not really work very well. If you look at the percentage of weapons who regularly get smuggled through during tests, one clearly sees that this can't be satisfactory to the expectation we all have. We need smart procedures like profiling if we want to continue to grow in passenger numbers or we will soon need to hand out overnight kits before security.

As I learned just today the bodyscanners reduced security actually, as a first study showed, because they trigger the alarm too often. That reduces the attention of the agents when they do the manual check afterwards and causes them to miss more things than with the old metal detectors.

I think we need a new system based on a lower level of scanning checks combined with profiling and background checks, done by the security services. That in combination with random intensive checks should bring the best results out of the resources we have.

It's great to see a great opportunity for deserving people. There should never be question that the pilots has the right in implementing safety measures for the passengers.