All Airplanes All the Time - Happy in the Golden Triangle 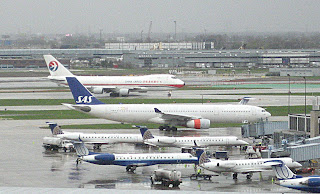 Storms in the so-called Golden Triangle, the corners of which are New York, Atlanta and Chicago have caused a lot of air travelers to hunker down at the airport, or return to wherever they came from with plans to try to fly tomorrow. Meanwhile, here in the heart of it all, I'm happy as the proverbial pig. Why? Because I'm coming off a week-long airplane extravaganza in Oklahoma and now I am stranded at Chicago O'Hare International Airport.
On arrival this afternoon, I learned my onward flight to New York was canceled due to weather with no chance to get out of town until Friday afternoon. I'm no fool, so I hustled on over to the Hilton O'Hare Airport, which has absolutely one of the best views on the planet for plane spotting.
From my room high above gates E, F and G, I am watching Kalitta Air, KLM and United B747

s and Iberia and SAS A340s, British Airways and American B777s take off from Runway 14R. That lineup of Fed Ex and Lufthansa Cargo MD 11s probably won't start moving until late tonight.
In the foreground, like pawns on the chess board, a passel of American, United and Continental (is that redundant?) RJs are chugging around - cute as can be. I am watching all of this over the screen of my laptop. I can hear the vroom of the engines and smell the jet fuel. Jealous yet?
This all-airplanes-all-the-time afternoon - courtesy of Mother Nature, no foolin' - follows an extraordinary week in which I was trotted from Tulsa to Oklahoma City to learn how rich is the history of aviation in the Sooner state. I guess had I given it much thought, I would have realized on my own that Oklahoma is pretty darned steeped in aviation.
The state's two biggest employers are the FAA's Mike Monroney Aeronautical Center and Tinker Air Force Base. And the whopping American Airlines maintenance and repair operation in Tulsa, competes with Lufthansa Technik in bragging that it is one of the largest airline-owned repair operations. (More on this visit from KOTV.)
At Tinker, along with a group of twelve journalists from the U.S. and Europe, I toured the maintenance and repair operation for half a day. Yeah, it's a big building, okay? We rode around in tram that made us feel as if we were headed for Disney World

but there was nothing Mickey Mouse

about the sight of KC-135s lined up one next to another inside 3.8 million square feet of cavernous space. The base occupies bunches of buildings but we spent most of our time in one of Tinker's new acquisitions, a former General Motors

assembly plant the state bought in 2006 and turned over to Tinker.
Oklahoma feels, I am told repeatedly, that the more it supports aviation, the more stable, well-paying jobs will be available for residents of the state. These are "gold collar" jobs, I was told by Kara Gae Neal, superintendent of TulsaTech, a school that trains students in aviation maintenance and piloting among other things.  With an I'm-serious-but-let's-be-real approach, Kara told me, "This not your father's shop class."
TulsaTech, like Tinker has been the beneficiary of Oklahoma's commitment to enhancing an already well-developed aviation industry. The school's gleaming new campus, spacious airplane hangars and engine shops are designed to turn out mechanics for many of the companies I visited and dozens of others in and outside of Oklahoma.
Geek confession - I loved engaging in all this plane-talk with other aviation writers and it was with regret that we said our goodbyes this morning and set off on separate flights back to Cleveland, Washington, Paris, Rome and England. I was the only one rolling sevens (and I'm not talking about Boeing sevens here) which is why I am now perched unexpectedly and delightedly over the perpetually busy airfield at O'Hare. Unwilling to remove my head from the clouds after a week at altitude, it turns out for one more night I don't have to.
Posted by Christine Negroni at 9:56 PM