Hey, Gérard Depardieu Urin' trouble!
Love it or hate it, CNN's Anderson Cooper program knows how to put together the clever repartee as demonstrated in the show's Ridicu-list segment last night.
Cooper jabbed French film star Gérard Depardieu for turning an British airliner into his personal urinal by peeing into a bottle after flight attendants told him he could not get up and go to the bathroom while the plane was on the tarmac waiting for takeoff.

But lest the Dublin-based CityJet reap too much good publicity for taking a yucky situation and treating it with just the right amount of humor and discretion, fellow Irish airline, Ryanair has jumped in with a just-in-time advertisement that queries travelers, "Pissed off with high fare airlines?"

Well that's rich considering that the budget carrier is the airline that routinely trots out the notion that passengers should pay-to-pee.
If there's a take-away on this story, beyond the pants-wetting puns produced by the CNN writers, it is that in the rush to pick on airlines, it doesn't hurt to consider what it's like to be on their end of the story; ill mannered customers who stopped holding their tongues and their tempers long ago, may now be finding it difficult to hold their bladders. 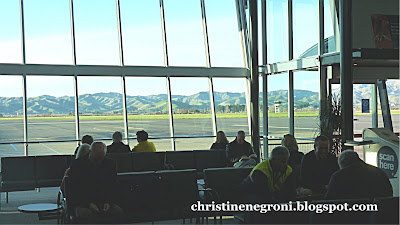 Perhaps the folks who really should be seizing the spotlight here are the clever sign makers in Blenheim, New Zealand where, while waiting to board my plane at Marlborough Airport recently, I followed the wise and wordless advice offered up the passenger waiting area. 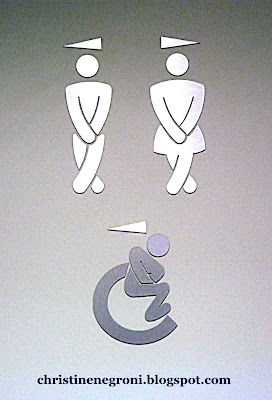 Hey, Depardieu -- maybe you should, too!
Posted by Christine Negroni at 3:08 PM

Wish I'd thought of that!

He can't be too proud of that...a Frenchman who can pee in a 2 oz bottle?

The following entry is similarly picking on Ryanair's idea of charging passengers for using the toilet.
http://ahmed-airlinologist.blogspot.com/2009/02/ryanair-is-improving-revenue-by-taking.html

Wow! Cooper was trying so hard to be funny with those lame puns. He needs to stick with reporting the facts.

Carriers could sell wee-bags at the gate (Ryanair take note). I used them for long flights in the Air Force (single seat).