When I heard Canadian Defense Force Major Adam Cybanski talking about his Hollywood approach to air crash investigations, by analyzing the videos of citizen documentarians, I knew he was on to something. What I did not know was that his Tuesday lecture to the International Society of Air Safety Investigators would be Friday's reality.
National Championship Air Race pilot Jimmy Leeward (R) crashed his World War Two P-51 Mustang into a seating area at the Reno race track Friday afternoon and within minutes, two separate videos were posted on You Tube.
There’s no crystal clear view of what happened, but glimpses suggest that Leeward, an experienced racer, pulled up out of the way of other racers before the plane nosed over and dived into the ground.
Leeward, 74, called in a mayday and "pulled up to clear the race path" according to Mike Draper, a spokesman for the race. Clearly Leeward was unable to control the plane after that. The video shows the P-51 smashing into the ground. Fifty four people were taken to the hospital and the initial fatalities including Leeward.
That this accident and the crash on Thursday of a private airplane across the street from a school in Salt Lake City came the very week that air safety specialists were meeting in Utah strikes me as a coincidence. Still, I hear the Twilight Zone soundtrack playing softly in the background. 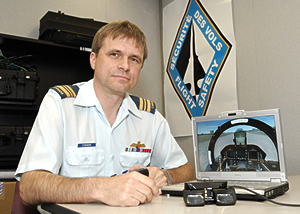 
"We can analyze the video and see how the wings were moving," he told me, "how the control surfaces were moving and how the elevator was moving; all sorts of stuff we wouldn't have if we didn't have the cameras there."
Expect Major Cybanski’s expertise in movie analysis to get a workout over the next few months. But even he may not be able to explain why, with all the safety prerequisites at air shows and races, the Reno spectator section was placed below the circuit where airplanes perform at low altitude and at  speeds in the 350-400 mile per hour range. It’s not as if this was Reno’s first accident. There have been more than 20 accidents in the show’s history, and in 2007 there were three fatal accidents all in one week.

When I start hearing the ain’t-this-odd soundtrack swelling in my head, it’s because all of this information converges as we are learning that commercial airline operations have never been safer. If Investigators were at risk of leaving Salt Lake City complacent that their work was done, they didn’t have to wait long for the wake-up call.  When it comes to general and sport aviation, it’s a whole different story.
Posted by Christine Negroni at 2:07 AM