You Want a Smile? That's Gonna Cost You 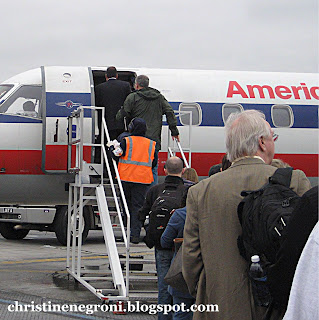 I have to laugh at the timing - in the span of two days two very different air travel stories appeared in The New York Times.

The first, in Sunday's Travel Section and reported by Michelle Higgins reveals that for a fee, American Airlines is offering to treat its passengers like VIPs.

On a recent flight, Higgins and her husband coughed up $200 for the airline's Five Star Service program, which entitled them and their young child to an escort from curbside at New York's LaGuardia airport through bag check, into a lounge with snacks and finally, priority boarding. In assessing the program, Higgins wrote that she bought a "civilized airport experience."

So have we reached a point where civility comes with price tag? Well that depends.

In Tuesday's Business section, I report that some airlines are heavily invested in making their passengers feel special at no additional charge.

My story focuses on Emirates, the Dubai-based carrier that's got a number of other airlines on the run. But other airlines have the same idea; Singapore, Japan Airlines, Air New Zealand, Virgin Atlantic, Lufthansa are all  known for adopting a strategy that treating customers right is just good business.

For a week this summer, Emirates allowed me to attend flight attendant school where, dressed in a uniform just like the adorable twenty-something students all around, I learned how to open the airplane door in an emergency, help a handicapped person into a seat, take down a disruptive passenger and deploy the evacuation slide.

And while a lot of what a flight attendant needs to know is how to save their passengers' lives if necessary, an equal amount of attention was paid to teaching them how to put themselves in the frame of mind of a traveler and how to become the face of the airline they would want to fly.

These airlines seem to think it is important to maintain standards - the opposite of dial-up-to-VIP service  - which is an outright declaration that unless travelers pay, they're gonna get something less.


When "a civilized airport experience" becomes another ala carte menu item for passengers, the incentive for airlines to make things better will disappear faster than an iPod

left in the airplane seat pocket. Why fix a problem if travelers can be convinced to buy the solution?

Airlines considering this new ancillary revenue stream: Beware. The companies that still take pride in service are likely to use it against you. They've already learned that money spent on training polite, courteous, people-pleasing employees not only returns to the bottom line, it goes a long way towards creating a civilized experience that everyone can enjoy.
Posted by Christine Negroni at 8:33 PM

I love that: “[F]or a fee, American Airlines is offering to treat its passengers like VIPs.”

(Misinterpretation alert!) There’s this really cute young girl on the street corner, says the same thing to me all the time. On a side note: it’s their kid and they can raise him any way they want, but I’m not sure that couple should be setting their kid up with an escort; not at that age, anyway. ;-)