All the great aviation writers, Antoine Saint Exupery, Ernest K. Gann, William Langewiesche, even the Boeing 747 designer Joseph Sutter (a surprisingly good writer for an engineer) know that flying is an exquisite balance of science and art. There’s poetry in the skies and plenty of it.

Nevertheless, the world of air travel we know today is reliant on the hard reality of complex and interconnected systems.  I mention this having just returned from Ethiopia, where Ethiopian Airlines, joined the Star Alliance and became - in my opinion - the perfect illustration of the yin and yang of the skies.

To many people - even plane geeks - what airlines participate in what alliances, is of little interest.  I got that. But it is worth pausing to appreciate how an airline can connect a traveler to twelve-hundred destinations in 189 countries while serving corners of the world so remote that the local airport is one of few places in the area with electricity.


Be astonished - because when I arrived on an Ethiopian Airlines flight at the tiny community of Lalibela last week, I was barely off the airport property before I saw farmers threshing  grain in the fields using hand tools. The finished product would be hauled in sacks, uphill on a donkey if they’re lucky, on the back of a person if they are not.


That airline services can reach previously unreachable communities is a thrilling evolution and it only occurs because of the love it/hate it progress of communications technology.
These alliances; Star, One World and SkyTeam, it doesn’t really matter, all require their members to  speak to each other, across many departments  from ticket sales to baggage tracking to frequent flyer programs.
Yep, it’s the decidedly unglamorous, down-to-earth reality of modern aviation.  But you can’t have that thrilling product, the ability to travel to and from formerly remote corners of our globe without it.

If you want to get a good debate going ask your friends, "What has had the largest effect on modern civilization; advances in communication or aviation?" Until a few years ago I would have said, "aviation". These days, though, aviation seems ever more reliant on following the innovations that have their origins in communication.

This was reinforced on Saturday when I boarded Lufthansa Flight 400 on my way home from Africa and discovered wifi was available during the eight-hour flight. While waiting for my computer to boot up, I looked out the window and  saw an amazing sight, the sun was casting the shadow of our A340 on the cloud layer below. Surrounding it was a perfect circle of refracted light. 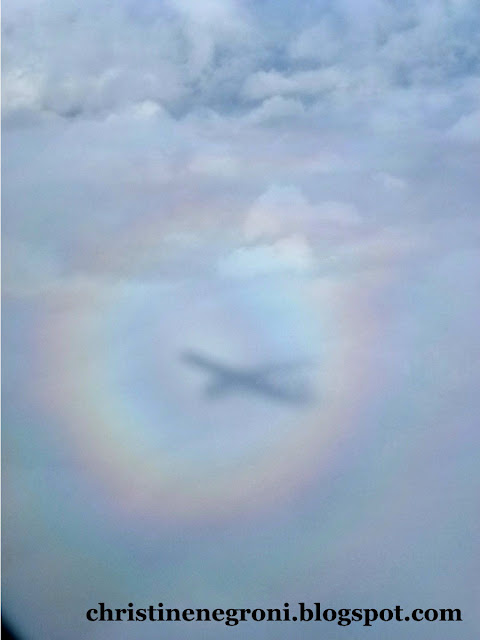 Meteorology may explain the phenomenon. Engineering got the plane up there in the first place.  Never mind, we were flying through a magical halo and flying was poetry again.

And the fact that I could take a picture of it and upload it to my blog’s Facebook page within minutes, did not detract from the experience one teeny-tiny bit.

Posted by Christine Negroni at 9:17 PM

Christine, I love your post and the magical moment of flying that you captured. I've seen that magic halo several times while flying and it always makes me stop and reflect a moment about the magic of flying. My Dad was a pilot with Pan Am for 37 years, from flying boats to the 747, and after he retired he wrote a book about the many magical moments that he experienced in his early in aviation career. Back in the day, a flight in an aircraft was truly a magical experience but today's travelers barely even look out the window. I often wish I could have experienced the early days of aviation first hand, the barnstormers ride out of a freshly cut hay field or the glory of the China Clippers Pacific ocean crossings. That magic halo always makes me reflect a moment and remember my Dad and his many flying experiences and the love of being up in the clouds. Thanks for your post!

Well Christine, you have done it again! You've artfully described that mystical relationship between Man and machine that we call flying. You have reminded us that regardless of the background, education or experience of the person or the sophistication of the machine, it's still flying and it is still magical.

Quote: "(a surprisingly good writer for an engineer)"

Anyway, may the Joy of the Season be with you and yours.

If I am surprised by the skill of engineers as wordsmiths it is because I am jealous that you get both right and left brain aptitude. That's quite a bucket of blessings. Merry Christmas to you, Frank.

Your great little article opened a cristmas box of wonderful memories for me that go from piper cubs to airliners. Happily, memories of a dear friend from Ganah jumped out of the Christmas box. He was an aeronautical engineer whose voice had an african lilt to it then took on a new england accent when he told me the name of the Conneticut university he attended. A man of many talents and high intellect who unfortunately was undervalued because of his color.

Thanks for the Christmas Box.

That was a good picture. As s student pilot in the Air Force too many years ago I saw that image often. In smaller aircraft and higher than about 1000' above the cloud you only see the halo and not the shadow.

We used to call it our "Guardian Angel".

Later as pilot of fast fighter jets I played around with it with different heights above the cloud.

It of course is nothing else but a perfect rainbow - the same you see when the sun is low behind you and an area of raindrops opposite. The cloud is much denser and the droplets much, much smaller so the rainbow is much smaller.

I'll be flying to Nairobi often from Canada starting March next year - maybe a chance to go and visit the kids in my home country South Africa.

Thanks for sharing that. It's a beautiful photo. I urge my readers to check it out.

I was flying a Mooney 201 with a couple of my friends back in 1986. We were just out having a good time. This particular thing happened to us as well, but instead of being below us, the end view silhouette of the airplane was dead ahead, so we flew right on into it and through it. There were a lot of early-stage cumulo towers in the area too, and we could fly around at say, 5500 and look waaaay up the sides, and way down the sides of them. It was like we were in the kingom of the gods.

Wow. I can only hope to see that some day. Thanks for sharing.