As JetBlue Flight 19 flew at cruise altitude on its way from New York to Las Vegas on Tuesday, passengers were surely shocked to see the captain, Clayton Osbon, racing down the aisle of the A320.

A newly released affidavit by Amarillo-based FBI Agent John Whitworth, describes the bizarre scene in which Capt. Osbon emerges from the forward bathroom and, rather than returning to the cockpit, walks to the back of the airplane stopping along the way to ask a male passenger "if he had a problem."
Capt. Osbon then raced back up toward the front of the plane and began to pound on the now-closed and locked cockpit door. 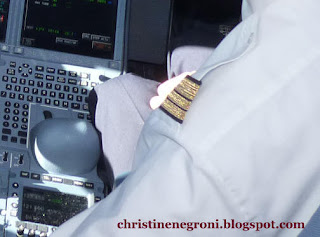 Many of the details have already been reported since the emergency landing in Amarillo on Tuesday. But the story relayed to the FBI by the flight attendants, first officer Jason Dowd and the off duty JetBlue pilot who responded to Dowd's request to assist him in the cockpit explain why so many of the passengers feel their lives were in jeopardy that day.

Aviation writer and airline pilot Patrick Smith tries often and with vehemence to destroy the myth that co-pilots are a kind of "junior pilot" unable to handle an airplane without the captain's supervision. Certainly Dowd's request for help from the off-duty pilot, from the flight attendants and from the passengers shows he's capable of quick and creative thinking in addition to capably making an unplanned landing at an unfamiliar airport. 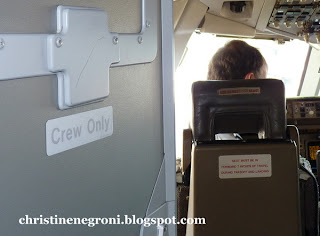 Reading through the affidavit, I have to conclude that what's behind the passengers' sense that they narrowly escaped Flight 191 with their lives has less to do with a lack of confidence in what was going in the front of the plane than a disbelief in what they were seeing unfold in the back.

You can read the FBI document here.

Posted by Christine Negroni at 11:36 AM

FOs are certainly no junior pilots, most of them are very experienced aviators. Regulations require that newly upgraded Captains fly with experienced FOs. The term PF (pilot flying) and PNF (non flying pilot) is very appropriate since it describes the role rather than the rank. Half of the sectors are normally flown by FOs.

Sorry, Christine, but IMO "...what they were seeing unfold in the back" may have been stressful on the pax, it's the irrelevant side of the story. The real story is that nothing untoward happened after the Captain unwound: the FO did his job; the FAs did their jobs; the deadheading pilot did what was asked of him; the pax did what was asked of them when it became necessary; and everyone ended up to see another dawn.
Absent a poll of the pax, I think that your conclusion that they sensed "narrow escape" is unsupportable.
The full story has been reported honestly by most of the media (for a change).

Grumpy, I disagree. Pax perceptions are the public perceptions and I know you know this are the perceptions politicians heed. Pilot running down the aisle, foaming at the mouth, subdued by passengers and held on the floor during an emergency landing, passengers crying. I don't feel I'm making too big of a leap to suggest the situation had passengers fearing for the worst. (I received an email from a father who's adult child was on the flight, telling me he was happy to "still have his son".) In this post and my previous one I credit the system for working well. Doesn't mean the event didn't scare the bejeebies out of the pax.

Christine, you imply that pax perceptions will somehow influence politicos to bring pressure on the FAA to do What? The father you quote would better have served reality by commending the crew & other pax for stepping up to meet the challenge. I wonder whether he has counselled his son never to fly again. I doubt he has similar qualms about his son's driving a car, although the likelihood of death therein exceeds death as a US airline passenger by about six orders of magnitude.
Next time, ask him what he would have changed.