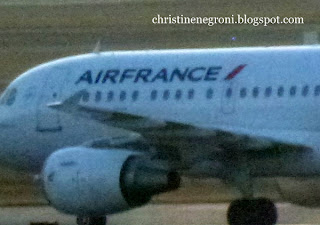 It is easy to imagine the terror of the 130 people on board Air France Flight 2240 on Wednesday when flying at 28,000 feet, some passengers reported hearing a constant beeping noise in the cabin. Unable to determine what was causing the sound and fearing for the worst, flight attendants told the pilots there was an unidentified item on the plane that could be a bomb. The pilots declared a Mayday and the plane landed at Basel/Mulhouse Airport on the France-Switzerland border according to Flight Radar 24 which tracks the flight here. But for twenty uncertain minutes these travelers did not know what was going to happen.

Even after landing, the drama continued as the A320-200 with registration F-GKXF was brought to an isolated area of the small airport where passengers were evacuated and the airplane searched. Then, and only then, did police discover what was causing the panic, the alarm was ringing on a Blackberry device a passenger had failed to turn off on departure.

Air France officials were unavailable for comment but they'll be paying a significant amount of money for the diversion. There's not only fuel that was wasted on that flight and on ferrying an empty replacement aircraft from Paris to Basel, but passengers had to be accommodated overnight and were 18 hours delayed on their trip. For their assumed panic, some might file a legal claim against the airline. (Don't laugh, its been done successfully in the past.) 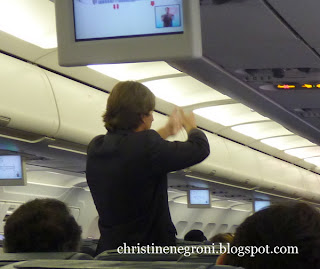 Whether the airline will try to recover some of those costs from the passenger is obviously unknown. But if row 5 is in premium class, executives may prefer to let the infraction slide.
This question of whether portable electronic devices present a threat to the safety of air operations has been extremely squishy. I'm among the few who keeps hammering the point that  this is an issue that will sooner or later end in tears. But I'm not alone in that belief. Just ask Boeing.

For the most part, however, the message from airlines and regulators has been ambiguous - leading passengers to treat the subject rather like religion. Their belief or non belief defines their behavior. 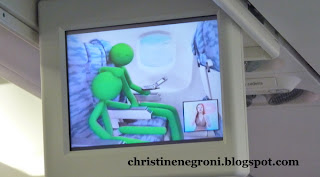 We don't know what prompted the Blackberry owner on Air France Flight 2240 to keep the device powered up, could be simple forgetfulness. But I could bore you with stories of how many times I've seen passengers openly defy the flight attendants and then you'd bore me right back with your own experiences. Let's just let it rest with these words, Alec Baldwin.

Readers, you know an accident is never the result of one thing. Air disasters lie at the end of an unbroken chain of events. Each individual occurrence may appear trivial - like tossing a powered Blackberry into the overhead bin. Sometimes though, otherwise benign happenings spiral into chaos. The best example to date is Wednesday's event on Air France. Mark my words, though, it is not the last.

Thanks to Jan Paul Peters for help on this post.

Posted by Christine Negroni at 11:28 AM

I read your post with a certain amount of shame: My phone has been on when I seriously believed it to be off. Whether user error or device error, it frightens me to think MY phone could create a deadly accident.

Electronic devices present many issues for all airlines and their customers. Some security related, some not.

More importantly though, let's not forget that these security incidents are a response to terrorism and terrorists. There are individuals and cultures in the current geo political world that believe the best way to further their agenda is to kill as many innocent civilians as they can in the most dramatic way.

Airline passengers throughout the world have given up immeasurable freedoms, valuable time and trillions of dollars in response to terrorism. These things were not taken away by any government or business. Those policies are just a response to a very real threat. These lost freedoms, time and treasure along with thousands of innocent lives have been lost to people trying to advance their extremist agenda.

God Bless the brave men and women around the world who are "on the wall" for us.

I do not know about how Blackberry does, but Ipods has "Airplane mode" on them.
Is that also something wrong if not turned out by traveling in the skies?

Not only do most modern cell phones have an "airplane mode" to allow legal powered up operations in flight (for games, etc.), many cell phones will still audibly alarm at set times chosen by the user EVEN IF THE POWER IS TURNED OFF. (Timer to feed the baby, timer to take medication, etc.) In my opinion, as a licensed commercial multi-engine pilot and professional risk analysis engineer, the crew declaring an emergency for a beeping cell phone was extreme and unnecessary, passing the murky boundaries defining hysterical, phobic, and politically-correct behavior. A REAL bomb maker will NOT allow an audible tone device to allow detection and disarming of a REAL bomb prior to detonation. The first sound emitted will be the last sound heard by those nearby (kind of like waking up dead).

"Air disasters lie at the end of an unbroken chain of events"...

I cannot go with you by your "chain of events" explanation. Better than bore everybody with a digression about the issue, my sugest is seen chapter 2 of this article: http://sunnyday.mit.edu/accidents/safetyscience-single.pdf

I do this way because Christine Negroni has her words with a rare powerful amplitude outside the technical literature.

You're kidding right? People are so scared of their own shadow they do not think. Only in the movies do bombs tic, beep or alarm. The bad guys know that to be successful the device has to go undetected. If it only takes beeping noise to cause a diversion and jam up the transportation system, stand by for cheap, watch battery powered devices to start showing up in droves.

Before you shoot the passenger for 'irresponsibility', you need to know about Blackberry behaviour.
They have an alarm feature that plays the alarm EVEN WHEN THE PHONE IS SWITCHED OFF.
I know this because it happened to me. And I had the full 'charm' of the Continental crew even though I had dutifully turned the device off. My human factors error - leaving an alarm active and putting the phone ahead to US from UK time.

I totally agree with Andy. It happened to me on an EMB145 sitting in 1A right in front of the FA when that alarm just blasted during descent, lucky I had it in my pocket.
Very embarrassing on a 50 seats aircraft. Now I have the alarm off on my blackberry.