What Airlines Can Learn from Unintentional Heroes 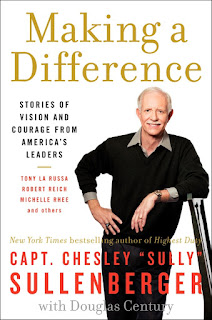 One never knows where the path called life will lead, witness Chesley Sullenberger, who I wrote about earlier this week. One day he's an anonymous airline pilot worried about his kids and his investments, the next, he's landing a crippled USAirways airplane in the Hudson and becoming an international icon of discipline and leadership.  Three years later, the mucho macho airline captain's 15 minutes of fame are far from over. Sully's well into promotion of book number 2, Making a Difference, which I suspect will be snapped up like free first class upgrades based on the length of the line at his book signing in New York on Monday.

But will another airline-created celebrity fare as well? Do you remember Dave Carroll, the Canadian singer-songwriter who's guitar was crippled by United Airlines?  His hilarious music video United Breaks Guitars became an international sensation on You Tube.


Carroll wrote three music videos about the event and he has even more to say in his new book, United Breaks Guitars, The Power of One Voice in the Age of Social Media, which has just been published.

I can't keep up with the books I need to read since I am thoroughly caught up reading the excellent China's Wings by Gregory Crouch (Thanks Craig Jenks, for the recommendation.) So with the predicate that I haven't read Carroll's book yet, let me say that he and Sully aren't too different in the way they are elevating a personal experience to something larger than themselves. 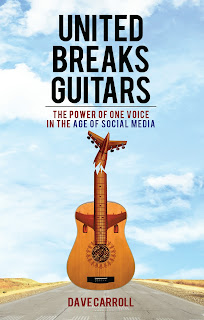 How successful either will be in actually achieving lofty goals remains to be seen. But I am skeptical that Carroll's book has done what one jacket review claims, that he has  "taught corporate America how to treat people better." I'd like to see some evidence of that.

To the contrary, last week, after reporting for The New York Times about new challenges in air travel based on the increasing size of air travelers, I received a call from a reader making it clear that some airlines remain tone-deaf to passenger issues despite Dave Carroll's catchy You Tube songs.

Dr. Alan Langer was traveling from Chicago to Denver last month on American Airlines Flight 3766. He was recovering from foot surgery that required him to get wheelchair assistance at the airport. On board the regional jet, he was seated on the aisle next to a passenger who was so large, "his arms came over the armrest and his right leg was so far over it went beyond the seat pocket where the safety instructions are located.  The result was I could not sit facing directly forward with my feet forward," Dr. Langer wrote in a complaint to the Federal Aviation Administration.

The six-foot-one Dr. Langer says when he asked the flight attendant how he was to make the flight since his seat was not fully available to him, he was told to put his legs into the aisle and that is exactly how he made the two and a half hour flight.  Not unexpectedly, the flight attendant tripped over him causing pain to his already injured foot, according to the FAA complaint. 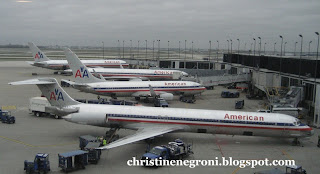 American, not an airline known for its customer service, offered a $100 flight credit to Dr. Langer who says that's not the point. And he's right. How does a company wind up with employees who are either not free to accommodate or not conscious of the need to accommodate passengers who have an obvious medical issue? Where the resolution to a problem includes telling a passenger to suck it up and put their feet in the aisle, to not only create a problem for the specific passenger but potentially cause injuries to everyone else on the flight?

Perhaps the answer to the question of how large companies can treat customers as if they were more than small nuisances can be found in Dave Carroll's book. And perhaps the interviews with various leaders interviewed by Sully will direct airline executives to find their higher purpose and then communicate it down to the employees they are supposed to be leading. These are worthy goals.  A round of applause and healthy book sales to the men whose very different starting points have led them try and achieve them.
Posted by Christine Negroni at 11:24 AM

Dr. Langer's situation was not merely one of accommodating a passenger with medical issues. It's a SAFETY issue. Requiring him to block the aisle, even partially, introduces an impediment to safe evacuation in case of emergency. He paid for a full seat, and AAL owes him one.
When similar cases occur, the passenger should document them. Every cell phone has a camera; take photos of the obese seatmate in situ. Take names of the Captain, FO & FA. (Ask for payroll numbers as well.) If the FA puts up an argument, demand to speak with the Captain. Gather witness IDs. Notify the Captain that you will identify him in a complaint to the FAA.
These events recur because passengers think they are powerless, and complaining is useless. Nonsense. Flight crews are all licensed, and formal complaints against their licenses WILL get results. Pax need to stop acting like sheep.

Dr. Langer's situation was mishandled on a variety of levels.

Grumpy is right about customers, airline or otherwise, having power. The only real influence over businesses in the service sector is money. Vote with your feet. Give your money to the people who act like they are willing to earn it.

I would strongly disagree, however, with trying to get satisfaction or retribution from the flight crew. That would be like holding the guy working in the plumbing department at Home Depot accountable for merchandise blocking the aisles. Ironically the plumbing guy probably agrees with you.

With respect to the evacuation situation, better do some research into ADA, Americans with Disabilities Act. They can and will sue for discrimination. It's a little more complicated than the Captain descending like a deity to unilaterally impose his/her will on the situation in the name of safety. Additionally, threatening the Captain's license with a complaint to the FAA will probably not illicit a response of, "Oh, in that case, how may I help you?"

Not to compare bad behavior to bad behavior, but…….. The next time you get less than acceptable treatment from a government employee, TSA for example, tell 'em you want their employee identification because your going to file a complaint against them.

Alan Langer's comments are directed toward an airline industry that is already under financial duress. I believe this is partly due to the politically-correct demands placed on the travel industry. It would be taboo for the airlines to discriminate against obese passengers or for that matter disabled/injured persons. It is not PC to charge a passenger based on their weight or to raise fees for non-ambulatory customers. However there is an increased cost to the airline to provide the proper accommodations, requests, and live up to the demands of such passengers. How this industry can maintain a profit margin as it already flounders in the 21st century is beyond me.

Most cell phones also have an Audio Record function. Us it, if only to prove that you are not an obnoxious drunk, before the captain tosses YOU off the airplane. Say "Safety Issue" repeatedly and remind them 'on tape' that you paid for a full seat, not a half seat. This is not about the $100 courtesy coupon, it is about getting the FAA and DOT to resume handing out sofe hefty fines. United (and others) don't care about $100 chump change, but when they get hit with a $50k or $100k fine, they will pay attention. And be prepared to take the next flight - becasue the Captain WILL toss your ass off his airplane.