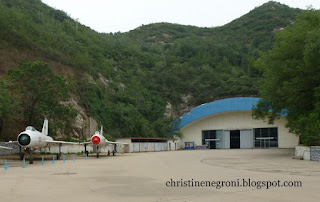 Writing from Beijing
Advice for all non Chinese speaking visitors to the China Aviation Museum; bring a guide! Second tip, read all you can about China's aviation history before you go, including Gregory Crouch's China's Wings. Third and last; wear comfortable shoes.

Like Arizona's Pima Air and Space Museum, a little multi-seat, battery-powered trolley carries (mostly older) visitors through the museum and across several acres of tarmac where a large number of airplanes sit.  With those comfortable shoes, you can walk rather than ride and get some exercise in the wonderfully cool, 2,000 by 131 foot three story-high mountain cave that now serves as the indoor exhibit space.

Few of the aircraft on display have placards.  Even fewer have English translations. This makes understanding all you see a bit of a challenge. Hence, the importance of tips number 1 and 2. 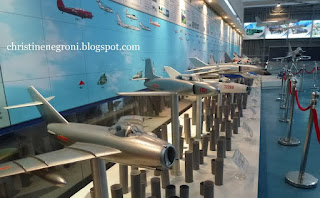 My guide, Jasmin Wang, remembers coming to the museum when she was a little girl - in truth not that long ago.  She accompanied me courtesy of Kensington Tours  a Canadian company that specializes in creating custom-designed itineraries for travelers with special interests. This explains how I happened to be the only non-Chinese, non senior-citizen visiting the museum on Wednesday afternoon. Jasmin translated a lot of the boards, throwing in her knowledge of "new China" history, but she was learning right along with me about some of China's unique history in plane and missile building and air transport.

I could appreciate the unique role China had in civil aviation, because for the weeks before leaving for China, I was totally absorbed in Crouch's excellent book.  And trust me you will be absorbed, too, even without a visit to the country. Two other books recommended to me which I did not have the time to read; The Flying Tiger by Jack Samson tells how U.S. General Claire Chennault trained China's fighter pilots for World War 2, and James Fallow's new book, China Airborne. Both are going on my nightstand as soon as I return home.

So with the full disclosure that China Aviation Museum is a former military facility, it is to be understood that short shrift is given to the civil side while fighters, trainers, helicopters and airborne weaponry are there in abundance.

Still, a life-sized model of Feng Ru's 1911 biplane, holds an attention-grabbing position in the first hall of the museum. Feng is considered the father of China aviation, and in addition to the fruit of his own trial and error  attempts to fly, which cost him his life in 1912, he is also responsible for the less sexy but equally vital task of translating into Chinese the reports of what other aviation pioneers were learning in America and France.  This could be interpreted as setting a pattern of behavior for the nation that continues to this day as some argued in a story I wrote last month for  the International Herald Tribune. 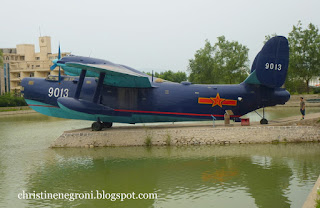 You can see what airplanes captured the interest of Chinese designers; the Y-5 made by Nanchang Aircraft Company was based on the Antonov 2, has a place in the museum for being the vehicle by which Premier Zhou Enlai's ashes were scattered.

A Soviet-produced flying boat, the BE-12 dwarfs the little lake on which it sits. The red carp swimming nearby add to the charm of this display. 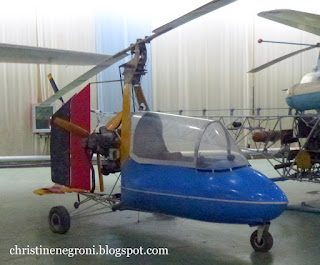 But the airplane that appeals to girly-me is the teeny-tiny gyrocopter. It sits prettily lined up next to a Chinese helicopter prototype, never built and a Chinese hobbyist's do-it-yourself reproduction of the massive American Apache war copter that is darned impressive and a sure-fire boy-pleaser. 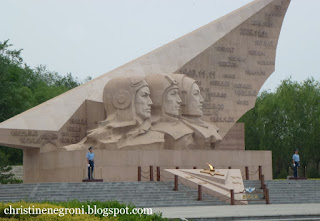 A monumental stone sculpture to the founding of the Air Force by the Chinese People's Liberation Army and which is guarded by soldiers and an eternal flame, dominates one side of the museum and one can't help but appreciate the fact that the long drive into the place is along an airplane runway. How's that for getting into the spirit before even walking in the door?  And for that, no translation is required.

For more non-aviation news on my visit to China, click here.
Special thanks to Zach Naimon for his help posting to Flying Lessons while I am traveling in China. 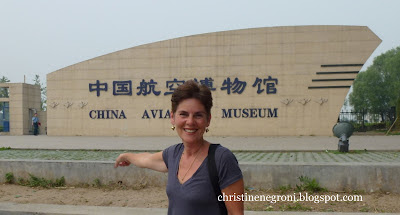 Posted by Christine Negroni at 7:39 PM

China's museum is missing a lot of civil aviation because they never had it until recently. They copied a few western and Russian designs for commercial transports. Only in the last 8 years or so has civil aviation taken hold. The Chinese military kept a lock on the airspace for non-military( and non-commercial) traffic.