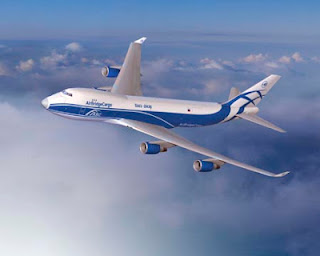 The board believes there is an urgent safety need, after GEnx engines on two Boeing 787's showed fractures "in the fan mid shaft" this summer. Investigators were studying these two low time - make that no time - engine issues when Ee gads! a practically brand new AirBridge Cargo Boeing 747-800 cargo liner experienced a shutdown of a GEnx engine during the takeoff roll from Shanghai Pudong International on September 11. The AirBridge engine had accumulated 1,200 hours and 240 cycles.

Damage to the low pressure turbine included broken fan blades and was similar to the damage seen on the first Dreamliner engine failure during a test flight in July at the Boeing assembly plant in Charleston. 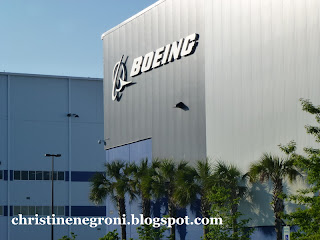 No manufacturer wants to be where General Electric is today with a mystery problem on a product it has invested heavily in and one it bills as the next generation. That's not hyperbole. The GEnx is the first with carbon fiber fan blades and fan case and performs with 15 percent reduction in fuel burn. It is also cleaner and quieter.

But right now its not the revolutionary pluses of the engine powering Boeing's latest airplanes that's got the safety board concerned. Like Rolls Royce's Trent 900 engines on the also-revolutionary Airbus A380, General Electric engines are a critical player in the 21st Century transition in aviation.

Someone once reminded me when writing about airplanes not to forget the engines - they often get lost amid the glitzy stories about new airframes.  The plane fronts the band, sure, because that's what passengers see and experience and well, the airplane is a lot better looking. 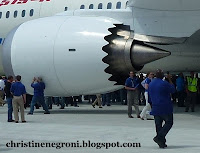 When all is said and done, however, it is the geeky drummer at the rear of the stage who sets the tempo - the unappreciated but critical participant in every performance. In this analogy General Electric is drummer. Like Rolls Royce it needs to tune up its instrument - the whole darn show depends on it.

I kinda sorta get the metaphor, but here's some things to consider.

The Rolls Royce engine too had some catastrophic failures during testing.

The "low time" engine always has been the least reliable. Talk with any "large recip" pilot and they'll tell you the same thing.

Most ETOPS diversions are NOT for engine problems.

The 787 has had more than its share of challenges during production/certification. This seems a little like piling on.

Lastly, the tolerances and demands on the the structures and systems of the 787 are unlike any seen before. You can't get the kind of efficiency "mandated" by ETS and others without pushing the envelope way out. In engineering, unlike the accounting used by the Federal Reserve, you can't get somethin' for nothin'

Keep the blogs coming they are always thought provoking!

Oh yea, what's up with the 'SNORGTEES" adds. Those aren't the type ads I would expect you to be endorsing. Clever, but edgy.

As usual, Jim brings up some cogent issues.
However, I'm sure he'll agree that comparing "low-time" jet engines to "low-time" recips is absurd. The principal difference between one (major) moving part rotating in one direction and thousands flailing cacophonically has done more than anything else to improve engine reliability.
RR engine failures, ETOPS diversions, and the Fed are all irrelevant to any problems with the GEnx. If there are consistencies amongst the failure modes, then there have been incorrect design assumptions.
I agree wholeheartedly with Jim's final point: pointy-heads in DC can no more "mandate" performance than King Canute could order the tides. Wait til you see how your vehicle performs when CAFE gets to its "mandated" 53 mpg.

Your assertion here is not logical:"However, I'm sure he'll agree that comparing "low-time" jet engines to "low-time" recips is absurd." Granted the TBF or in this case TUFF (Time Until First Failure) are vastly different, but having flown round-engines, flat engines and jets, I agree with Jim. Ask Tom Emmert; Ferrying a popular single engine airplane from the factory, he got 10 hours into the delivery flight when the engine caught on fire and after an emergency landing in the desert, Tom spent 6 months in the burn intensive care hospital.

The reason basic certification and ETOPS require a certain amount of operational time-in-test is to shake out the bugs as engineering "pushes out the envelope."

The first X-number of hours after any re-engineering, or maintenance for that matter, are historically the most fraught with problems. That's why airlines do a "post-inspection" flight test after major check events.

We will have to wait and see how these new "plastic" developments stand up to the demands of day-to-day airline operations. From engines, to airframes to who-knows-what-next, the key to success is the total robustness and redundancy of these systems to mitigate any single point of failure. Lessons learned are inevitable; disasters are unacceptable.