There are a lot of stories at that airline, which specializes in those not-so-easy flights into territory above the treeline and way, Way, WAY below freezing for most of the year which I will save that for another day.

What I want to write about today was my first ever airport/airline tour conducted by bike.

Calgary is a bike-friendly community and my airbnb hostess  in town made a cute little multi-colored bike available to me during my stay so I planned to get to Canadian North on that.

Unfortunately, the directions Sid earnestly sent via email wound up in my spam folder where I did not think to check for them, so I had to set out on my own with a map and a general idea that if I followed the airplanes on approach flying above me to Calgary's charming inner-city airport, I would probably get pretty close to my destination.

From the map I could tell it would be a beautiful ride, on rolling hills full of wildflowers and passing two golf courses, one of which is on airport land - get that! 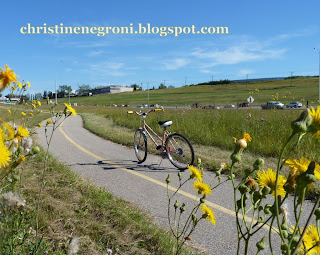 What I did not anticipate was that within a mile or two of the airport, Sid would come pedaling up to meet me. But that he did, making a big U turn in the middle of 19th street introducing himself and taking me on a backstage tour of the backside of the airport, the places few Air Canada or WestJet passengers ever see. 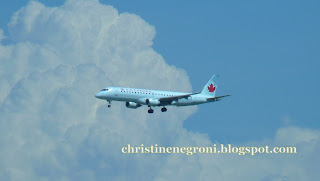 This included FBOs, arctic flight specialist Ken Borek Air and the Viking plant where deHavilland airplanes come off the assembly line as they have for the past 85 years.

Oh the stories Sid told as we toured the beautiful renovated hanger where the airline now checks in and clears through security, miners, oil field workers and a variety of other passengers both scheduled and charter.

The challenges facing airlines like his that must land on runways made of perforated ice, in destinations where the presence or absence of food and medicine depends on air access are mind numbing. Somehow, though, the airline with a dozen and a half airplanes, is making it happen and turning a profit for its owners, native Canadian Inuit of Nunavut and the Inuvialuit.

Biking to an airport tour combines two of my great loves and is an experience I'll never forget. By the end of the tour however, I had a deeper appreciation of the important role aviation plays for those who live and work in otherwise inaccessible parts of the world. Keeping it all going - and going safely - is no ride in the park, no matter how it much fun it seems on a lovely, sunny day in August.

Posted by Christine Negroni at 1:49 AM