Take a good look at this Boeing 787 in flight, then remember, that's not a sure thing with the troubled Dreamliner. In the most recent interruption, the six-month-old LOT Polish 787 tail number SP-LRB seen left and another plane, tail number SP-LRC were grounded for several days when mechanics discovered missing fuel filters on the planes' Rolls Royce engines.

A source tells me during testing at Boeing in Everett, Washington, mechanics at the plane maker removed the engine's fuel filters and failed to re install them. The planes were then delivered to the airline and began flying in passenger service - even though running the engines in this condition could lead to engine damage.

SP-LRB was delivered to LOT from the Everett assembly plant on December 20th, 2012.  SP-LRC arrived this year on May 15th, after the 4 month grounding of Dreamliners by regulators over the winter.

These two planes operate on routes to New York, Chicago, Peking and Toronto. 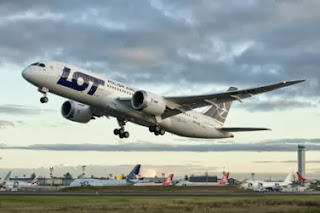 I am told the fact that the filters were missing on three of the four Trent 1000 engines on these two planes, was discovered during an engine check in Warsaw.  The planes were grounded immediately and Boeing sent service technicians. One plane was repaired and put back in service on Saturday and the second was flying again the following day.

Still, LOT is none too happy to have had to operate without its Dreamliners even for just a few days considering what it has already been through especially since the problem seems to have its roots back at Boeing.  My source tells me that Boeing is in full "Oh shit!" mode and when asked how this could have happened, Birtel said that the company is "doing a full assessment. An investigation is still underway." 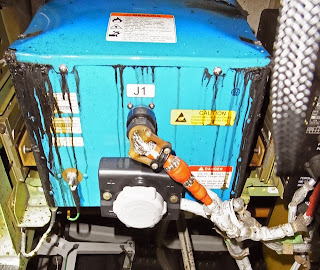 In case anyone needs to be reminded, the world's newest wide-body airliner was the subject of a global grounding of the fleet of 50 planes in January, after two fire events associated to the lithium ion batteries used on 787s operated by Japan Airlines and All Nippon Airways.

In July, a spokesman for LOT expressed displeasure with what he said was a dismissive attitude by Boeing in paying compensation to airlines that suffered financial losses during the grounding. LOT was said to be seeking around $30 million.

LOT's Robert Moren told Bloomberg's Justin Bachman, “Those [costs] are not probably gigantic money for Boeing, but for us—while we are in the process of restructuring—it’s quite substantial.”

By contrast, this weekend's interruption of service on two of the airline's five Dreamliners is a minor glitch. I understand that regulations allow some limited number of flight hours without filters, but left unrepaired, this situation could lead to clogged fuel nozzles or damage to the combustors. In this case, operating the engines without fuel filters caused no serious damage to the engines according to Birtel.  Boeing is confident no other airplanes were delivered with missing fuel filters.

It seems that LOT has avoided a problem but whether the latest 787 event casts further doubt on the reliability of the airplane is less than clear.