One Data Point a Focused Reminder in Missing Jetliner Story

Writing from Kuala Lumpur -- Regarding the quizzical disappearance of Malaysia Flight 370 and the overwhelming flow of theories from professional and arm chair investigators alike, Tom Haueter told ABC News on Monday, "All it would take is one additional data point to say, 'Wow, we were completely off base.'"

These wise words from the former director of aviation safety with the National Transportation Safety Board should serve as a mantra for everyone reading, writing and jawboning about the Boeing 777 that left Kuala Lumpur for Beijing on March 8th and never arrived.


Several days ago, I went out on a limb, writing here that despite the groundswell of opinion, I was not convinced that the plane's disappearance was the result of a criminal act. Since I was ready to be embarrassed if I was wrong (and I still could be) let me take a public bow for having been at the forefront of a flood of subsequent similar suggestions.


On day 11, I find intriguing a fact reported by ABC News late last week that someone on the flight deck of Flight 370 changed the heading before subsequent losses of the plane's communication systems. (Disclosure, I am working in KL as a consultant to ABC News.)

If the information from David Kerley and Matt Hosford is correct, it is one of those course changing data points.

To recap, during many days of briefings in the packed ballroom of the Sama-Sama Hotel at Kuala Lumpur International Airport, we have been told that the order of known events on the flight deck was
According to investigators this pointed to a deliberate, sequential plan by someone in the cockpit to hijack the airplane. And no surprise that theory soon was embellished with news accounts some more sensational than others. The plane flew a purposeful path dodging radar, one newspaper reported. The captain's bearing when leaving his gated community the morning of the flight was uncharacteristically distracted and militaristic, reported another.

But on Monday, we got a different order of events, the turning off of the ACARs, was not the initiation of a number of sequential acts. In fact, investigators could not say exactly when the ACARs was turned off, or even if it was. Only that a data transmission scheduled for 1:37 a.m. did not arrive. 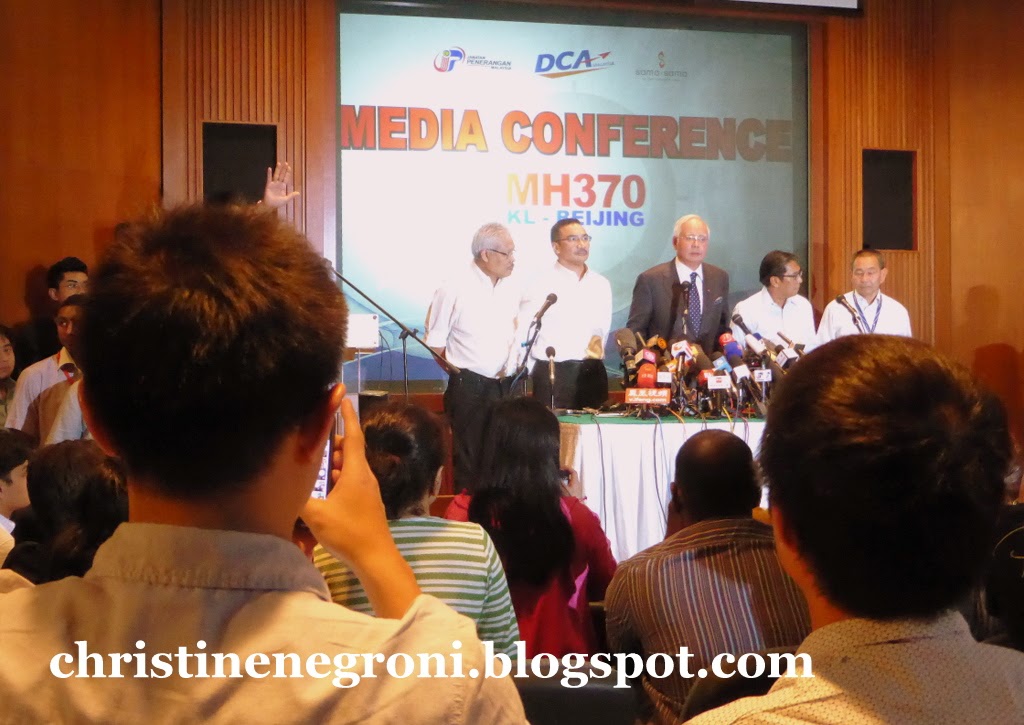 What this leaves us with is that the pilots got the hand-off at the edge of Malaysian air space and this was followed by the turning off of the transponder.  At some point in this flight, the pilots would have turned the transponder to the out of radar range 2000 setting. How close to that point they were at the time, I can't say. But certainly this leaves open the idea that something else caused the loss of transponder and ACARs including pilot error, rather than deliberate actions of the pilot or cockpit intruder.

All of which elevates the reporting of a pre-programmed turn to verrrrrrry interesting status. Entering a turn into the flight management system which then beamed the info to the satellite before a 1:07 data transfer can only mean they knew they were taking the plane off course and did not communicate that in the air space hand-off. It could mean pilot action, it could mean pilot action under duress.

It's a big development ladies and gentlemen. But is it known for sure, or is it, like the order of communication shut down, a fact one day that will be disputed on another?

Or as Tom Haueter might have said, "Today's data point, tomorrow's equivocation."

Posted by Christine Negroni at 11:14 PM

I think your post is spot on. There is a lot of distance between what DID happen and what COULD HAVE happened.

Speculation is interesting, but seldom productive. Disciplined, solid investigtion will bear fruit, but it takes time, resources and patience.

Unfortunatley, that is no comfort for the humdreds of loved ones aching for news of the missing passengers of MH370.


One of the thing that flight crews do is to program the next leg of their journey while they are en route to a destination, and then store it.

Then when they take off (from Beijing), they don't have to do it in a rush before takeoff.

So the first thing to check is whether the programmed direction have anything to do with the next leg of the journey.

Thanks to both of you for your comments. Anonymous, you are correct they could have been programming the next part of the flight but in this case the turn was not on the flight plan. It was in fact a turn back in the direction of departure. The question is why?

Suppose the emergency had occurred already.

The theory is the other pilot spoke under duress when they said good night.

Another theory that need to be explored is how sure are we of that timeline for programming and also of the pilot conversation?

Note there was a subsequent conversation with another plane that just got a buzz sound.

What is troubling about this investigation is the failure to establish facts in a way that clearly state what is known, error bars / uncertainty intervals, and then interpretations being done on the facts that are in turn subject to change.

Christine --- you are doing great work, but nothing can fix what is turning out to be problems with sound scientific and technical investigation 101.

NB I also recommended that every speculative scenario be run through simulators --- why is that not being done?

There are a few other things. Climbing to a height of 45,000 ft (above normal range/approved height for the plane) and than an erratic dive to 23,000 ft appears to point to a 'sudden event' either equipment failure or deliberate, but unlikely to have been initiated by one of the pilots. Explosives (shoe bomb?) could have triggered a sudden reaction due to (some) damage to part of the systems. If it was a deliberate act from the pilots they would have reprogrammed the flight professionally and without the steep climb and subsequent nose dive.

Now we hear the story about how some logs of a flight simulator was erased by Captain Zaharie Ahmad Shah.

I suppose the next thing the investigators will do is to find evidence of and witnesses to Captain Shah committing sodomy on his First Officer, as that is the usual way Malaysian justice remove troublesome people.

Meanwhile, Malaysian Air, who do their own maintenance, is not disclosing any information from the maintenance records, in particular, as to whether certain Airworthiness Directives that might relate to this incident was properly carried out, regardless of whether or not the deadline was past.

Such as the AD on oxygen hoses.

While the Malaysians are chasing wild geese, asking for FBI assistance in recovering deleted data from the flight simulator, guess what?

The ones in charge of coordinating search and rescue have dropped the ball, resulting in S&R assets offered by other nations sitting around with no orders or nothing to do.

Is it a surprise that quietly, other nations are dropping out of the effort when they are so ineptly managed?

Good thing the southern search is now being run by the Australians, who at least, know what they are doing.

I'm not sure the climb followed by a 20K ft descent can't be attributed to a climb due to high power setting followed by a stall before regaining flying speed back at 29K.