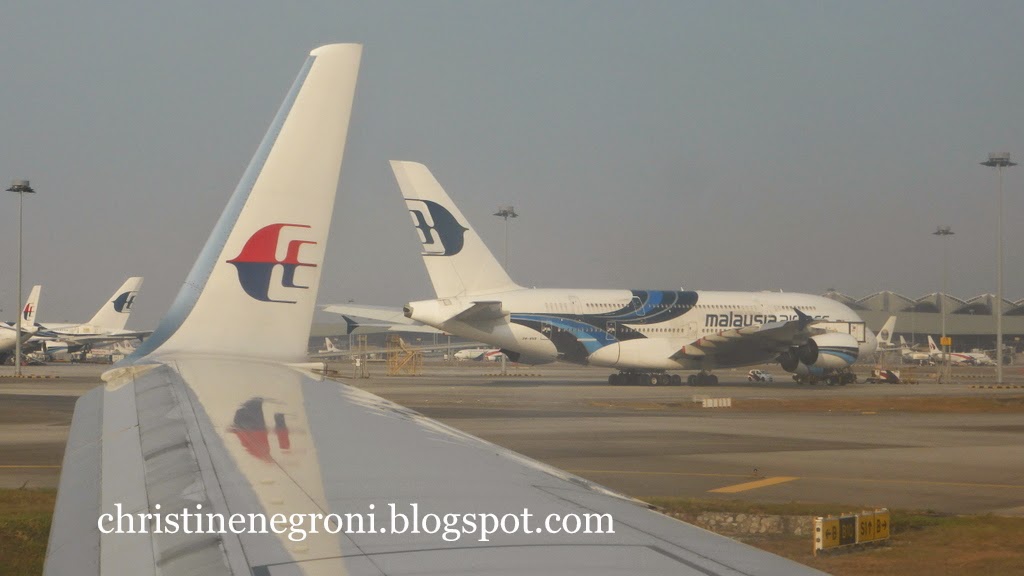 Airlines don't bring hundred+ million dollar airplanes and the highly-trained folks who operate them into countries without analysing the security status of the airport and the places where their flight crews will be housed. That's why the kidnapping of two pilots for Turkish in Beirut around this time last year was so startling. The transport van taking the entire flight crew was stopped and the pilots removed at gunpoint. Murat Akpinar and Murat Agca were held for two months after becoming unwitting players in the Syrian civil war. And if the industry needed a reminder that airlines aren't immune to seemingly unrelated conflicts, that was only the most recent of many similar events.

Airline security departments are 24/7 operations run by former soldiers, spies and law enforcement officers. They are paid to keep track of potential security threats in the countries into which they operate. They wouldn't rely solely on government security reports any more than they would depend entirely on protection from local police. So why, with weeks of escalating combat in the Ukraine, were so many carriers still flying through the area?

As early as March 3rd, Korean Air, itself the victim of a missile fired at a Boeing 747 in 1983 changed its routing to avoid Ukraine territory according to spokeswoman, Penny Pfaelzer, who cited "political unrest" as the motivating factor. British Airways abandoned the route as well, though the spokeswoman would not tell me when or why it made that decision. Air France failed to answer my questions but it appears to have opted out of flying on the route even while co-owned KLM did not, according to flightradar24.com.

So while Malaysia is self-evidently correct in its statements; the airspace was open and hundreds flights between Europe and Asia were using it every day, it is a weak reply to a valid question of responsibility.

In an unofficial conversation, one industry insider complained to me that the media focus on Malaysia's decision to fly the route is akin to blaming the victim of a crime for being in the wrong place at the wrong time. I don't agree. The better parallel would be the bus company that keeps routing its trips through an area of rioting.

Safe and secure passage is just as much a part of route planning as fuel costs and overflight fees. Getting there without being shot down by the combat going on below the plane hasn't been "unbundled" from the ticket price yet.

Where Malaysia is absolutely correct is that only an extraordinary roll-of-the-dice seems to have made it the victim of the missile strike.

In a conversation on Friday, Philip Degare of World Air Ops in Toronto explained that the April closing of the Crimean and Black Sea airspace due to a air traffic control dispute had the effect of pushing more flights into the combat zone. That means hundreds of airliners could have been MH 17. 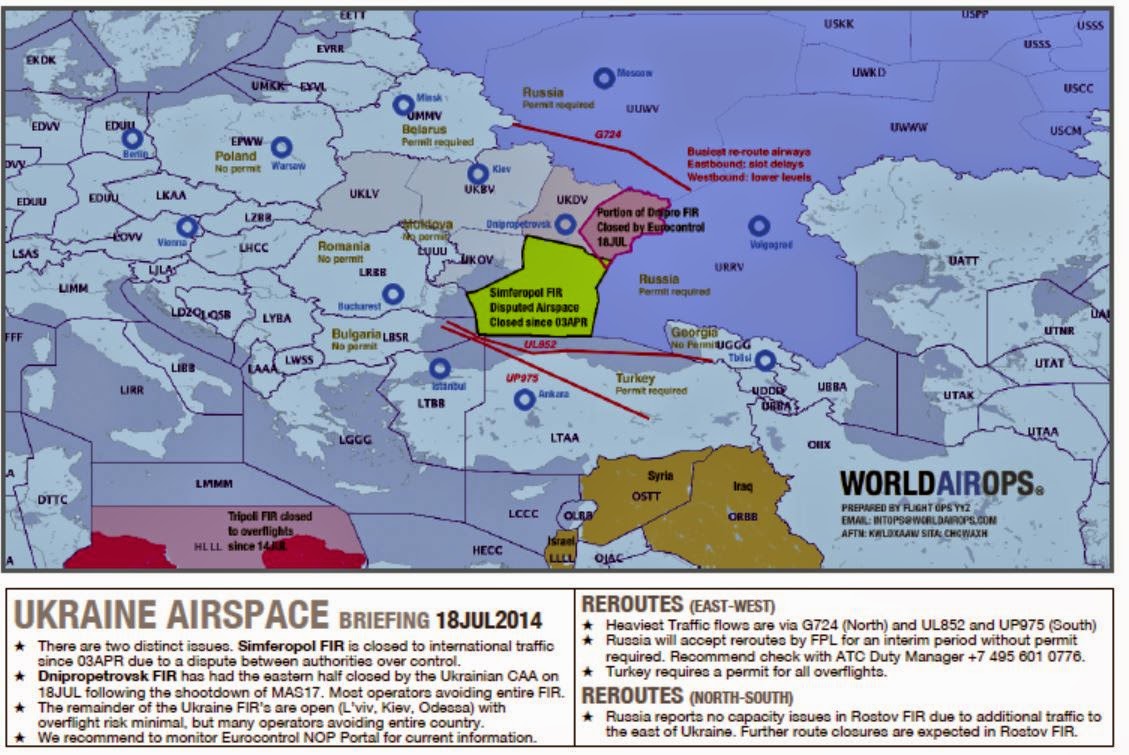 "There would have been a significant increase in traffic over the conflict zone because of closure of Simferopol even though the conflict zone didn’t exist when the Simferopol air space was closed," Degare told me. The first aircraft were targeted in the Russian Ukrainian hostilities in May when a helicopter was felled. "From then onwards it escalated," he said.

Regardless of what hell was playing out below, the airlines, civil aviation authorities and government agencies seem to have been lulled into believing that combatants did not possess weapons capable of reaching an airliner's cruise altitude.

In a stunning statement to Josh Margolin of ABC News, an American official said “We didn’t believe they had anything (weapons) that could reach that altitude. Had we known what we know now, that they had things that could reach up to 80,000 feet, the airspace would have been restricted.”

Why authorities didn't know that missiles with greater range were in the area is a bit of a mystery to me.

On Monday July 14th, a radar-guided SA-11 capable of reaching a target as high as 72,000 feet,  hit a Ukrainian Antonov-26, according to The New York Times. Two days later on the 16th, a Ukrainian SU-25 was shot down in air-to-air combat. The Kiev Post reported it hours before MH 17 was felled. These developments make irrelevant, the selection of 33,000 feet and above as safe altitude.

So yes, Malaysia appears to once again be the victim of the fates, once again exposed for complacency in how it goes about ensuring the security of its flights. This time, however, other airlines, aviation organizations and world governments have questions to answer because it appears they share Malaysia's catastrophic obliviousness.

Posted by Christine Negroni at 12:24 PM

The Dutch Safety Board announced that besides taking part in
the international investigation , it is also starting an investigation
into the decisionmaking processes around flight routes.

After it happened they knew all about it in advance.


There is an explanation as to how relatively unskilled "drunk" militiamen can operate the SA-11 system.

First, it does not need to be operated at "military grade" proficiency, which require positive identification of targets before the officer in command gives the authorization to shoot.

That would require the other vehicles in the missile battery, such as the radar vehicle, etc. and also linking to an air traffic control system for transponder data.

Suppose the Russians want to conceal their involvement.

The rebels are known to have possibly captured one SA-11 launch vehicle, possibly in working order but not necessarily complete.

That provide the cover to smuggle in several other TELs (Transporter, Erector, Launcher), but not necessarily with the full compliment of Search Radar, Command and control, reloader, etc. that is a normal SA-11 battery.

How to get targeting information?

A regular telephone (wireless or otherwise) or radio link to Soviet air defense or air traffic control radar would be sufficient to alert the battery of the general approach of an aircraft.

The Ukraine Air Force was known to be flying at least one jet roughly along the same course.

Suppose the information is passed to the SA-11 battery --- with only the TEL (vehicle with 4 missiles) but not the other pieces.

The operators of the vehicle would be told to point the missile / radar in that direction and simply shoot at the first thing they see.

The SA-11 battery has its own radar. In fact, almost all Soviet era gear of that level or above have at least one backup system in case the more complex system failed.

More likely than not, the SA-11 battery's radar that do not have much of a search capability, but have targeting capability (for the "locked on" signal, was simply aimed at the only signal it saw but could not positively identify.

The operators probably thought it was the Ukraine fighter, but instead, it was the passenger plane.

Such a targeting radar do not have much ability to judge height unless it is calibrated --- a delicate procedure that required trained operators, more equipment, and time.

And the rest, is history.

The latest downing of two SU-25s flying at a reported 17,000ft bolster the theory that someone is helping the rebels with targeting.

If they used a search radar for the SA-11 or like system, it will be detected.

The Russian air defense radar backing up the rebels is looking better and better.

Or the missiles were fired from Russian proper under Russian military command.


Aviation week support above explanation of unintentional shoot down:


So do US Intelligence:

Except readers of comments got mostly the same version a few days sooner.