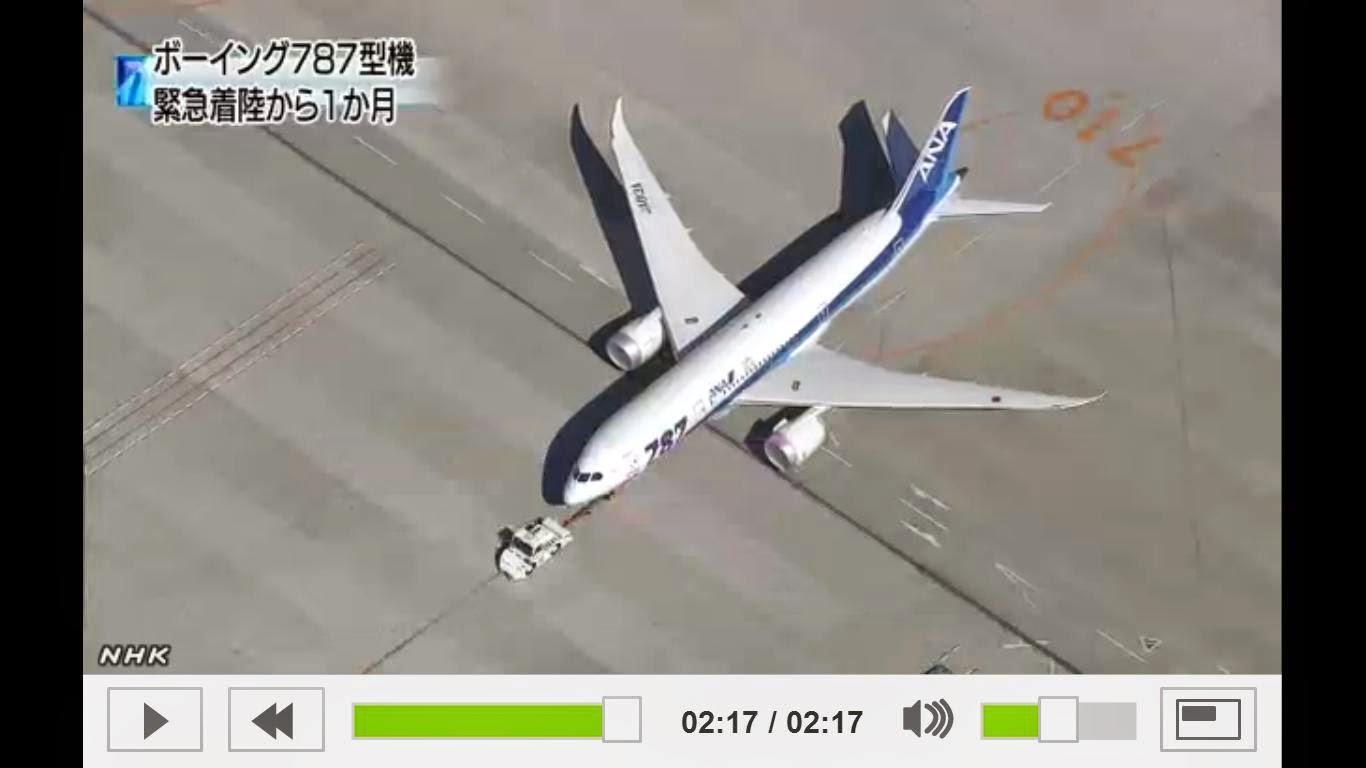 Far from dismissing three safety events on Japanese Boeing 787 Dreamliners as mysteries that will go forever unresolved, the nation's safety authority has issued a series of recommendations to Boeing, and the Federal Aviation Administration that suggest the two entities don't fully understand the ways the volatile lithium ion batteries and their chargers can fail.

The Japan Transport Safety Board (along with the U.S. National Transportation Safety Board) has been looking into what happened on board three Japanese airliners in 2013 and 2014 to cause the revolutionary new airplane's lithium ion batteries to fail. This resulted in smoke, fire and a lot of panic among passengers not to mention the global aviation industry.  After the first two events two weeks apart in 2013, the 787 was grounded from January to April.

In telling reporters earlier this week that "Maybe we have not found the cause but we have a workable solution," Norihiro Goto the JTSB chief makes it clear the board's just-released final report is not the final word.

Instead, the report, released in English on September 25, says during its examination of the batteries and charging devices and a lengthy series of tests, the investigators learned that the battery system performed in unexpected ways, "outside of the design envelope".

In short, the Japanese are saying that the 787 Dreamliner, 180 or so of which are now flying around the globe on ultra long haul operations, hours from an emergency landing airport, continues to baffle the scientists and engineers who designed it and those who supervise its safety.

This may come as a surprise to those who took the FAA at its word that in issuing the "special condition" back in 2007 that first allowed volatile lithium ion batteries to fly, it and Boeing exhaustively studied, comprehended and mitigated the dangers. But in the report, the Japanese say, the safety of the lithium ion batteries was overstated. In one of several recommendations it makes to the American safety agency the JTSB asks it to reassess its earlier "inappropriate calculation of the failure rate."

To me, the most significant failure noted by the JTSB was in performing tests prior to certification of the 787, Boeing did not replicate how the battery and charger would be installed on the airplane.

Who can answer why the earlier tests conducted by Boeing and ostensibly approved by the FAA were different from how the lithium ion batteries would ultimately be assembled in the aircraft? Whatever, the report concludes that the battery standards "do not appropriately address the electric environment."

Further, the battery charger performed in ways that threaten the ability of the lithium ion batteries to provide emergency power for plane, which is, curiously, one of their most important functions. The FAA and Boeing need to "improve" that, the report says.

In its conclusion, the Japanese say the use of lithium batteries in flight should be reviewed in light of the actual failure rate, not the optimistic one put forward by Boeing. And in a tone, not unlike the way I would speak to my misbehaving children, it offers that in the future, the FAA should require that equipment tests simulate actual flight operations. (These suggestions were in part, reinforced by the French Bureau d' Enquents et d' Analyses, included in a letter to the JTSB at the conclusion of the report.)

So, no, there's no answer to the question "what initiated the battery event" on the ANA Flight that sent passengers scrambling down the emergency evacuation slides on a winter day at Takamatsu Airport in 2013. But there's enough what-could-have-been discussed the report to send a lot of airplane designers and safety experts back to take another look at the Boeing 787 Dreamliner. And that's without knowing what the NTSB intends to conclude about the Japan Airlines event in Boston.

But it is a far, far different summation of the Dreamliner's airworthiness than what the FAA concluded earlier this year. To understand why that reminds me of Woody Allen's views of sex, click here.

Thanks for your great blog. As an interested lay person, i would not book a flight on a 787 until Boeing do a much better job of completely resolving this issue. Nor do i trust the FAA in this matter either.

Amen! Anyone care to start a pool on when/where the next Li-battery runaway will occur on a B787?


A very simple, and easy to do fix is to install a high temperature safe insulator barrier between the aluminium side pieces and the battery.

Ceramics come to mind, with sufficient clearance to ensure there is no damage to the battery etc. from rubbing.