Germanwings Pilots Likely Faced a "Get Down ASAP" Event 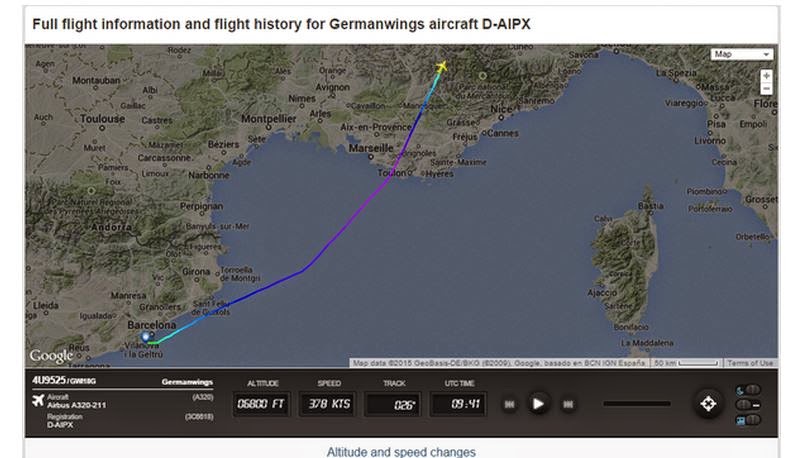 My thoughts on Germanwings crash to Larry Fedoruk CKTB News Talk 610 can be heard here.

It is too early to say what caused Germanwings Flight 4U 9525 to crash into the mountains in the French Alps. But the actions of the crew in quickly bringing the Airbus A320 registration D-AIPX down from 38 thousand feet suggests to me that this was a "get this plane on the ground" event.

That suggests one of a few scenarios; decompression of the aircraft, structural failure (which could also have triggered the decompression) and smoke and or fire.

After pushing the theory that Malaysia Flight 370 might very well be pilot incapacitation by hypoxia, I'm naturally a little skittish about throwing that theory out there again. But a very quick search shows several depressurization at altitude events on the Airbus A320, two in the past few years.

There was one in 2006 at 36 thousand feet and one in December 2012 at 38 thousand feet. These come from NASA anonymous aviation safety reports and do not identify where the events occurred. 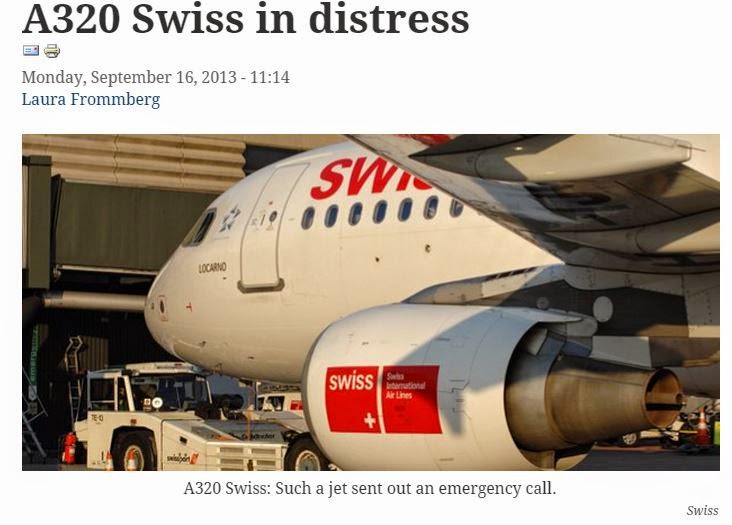 On September 12, 2013 Swiss Flight 2140 registration HB-IJQ was at 37 thousand feet when cabin pressure began to fall. The crew requested a lower altitude and were cleared to 35 thousand feet but no lower. Only after the crew declared an emergency were they given clearance to descend further.

The story of the plane that was delayed in its clearance to fly to safety naturally wound up in the newspapers where among pilots the question of whether an emergency should have been declared immediately was widely debated. Keep in mind at the altitude at which Germanwings was flying, pilots had only 15-30 seconds at best to respond appropriately, don oxygen masks and begin a descent.

After the Swiss event in 2012, one can assume the procedures for promptly getting down to safe levels in depressurization events was given a thorough review at Swiss and probably the other carriers in the Lufthansa group.

That the experienced pilots on flight 9525 opted to bring the plane down, rapidly and in uncertain, mountainous terrain tells me they were alarmed by the circumstances they faced. Joseph Szot, a Flying Lessons reader with pilots in his family makes this chilling point. "You can run into all kinds of crazy wind patterns coming off the mountains."

It may be lost on the ordinary air traveler, but the truth is many aviation emergencies do not require an immediate descent, just the opposite. In his book,  QF32, on the uncontained engine failure of a Qantas Airbus A380 in 2010, Capt. Richard de Crespigny describes wanting to keep the plane in the air while the five men in the cockpit figured out how to deal with a cascade of problems.

The three most useless things for a pilot in a pickle, so the saying goes, are runway behind, fuel consumed and altitude above.

Pilots recognize the blessing of altitude even in a tough situation. But it wasn't an assist on this particular flight. Investigators will certainly focus on finding out why.
Posted by Christine Negroni at 11:47 AM