Airline executives meeting at the industry confab in Miami were pleased to be talking about a new app that coordinates with health monitoring programs for iPad, Android and Apple watch devices. The SkyZen wristband will “offer passengers personalized insights on their flight activity and strategies to minimize jet lag before and after flight,” said Tom Windmuller, Senior Vice President of lots of stuff including the passenger experience with the International Air Transport Association.

At this point the SkyZen is in the experimental phase. No one is sure if travelers already keeping track of their steps, their heart rate and their stress levels want to elevate the self-exam to include how long they sleep and how many times the get up to go to the bathroom while traveling from  A to B.

But even as Windmuller was explaining the latest elevation in passenger coddling at the plush Loews Hotel on Miami Beach, outside the hotel, airline workers who create the meals and deliver the sodas to airplanes were agitating for an enhanced work experience. With airlines in the United States making record profits, these hourly wage employees are asking that some additional money end up in their paychecks.

Winston Garvey, an customer service rep for LSG SkyChefs is a member of a labor union UniteHere, part of AFL-CIO. He makes $12.5 an hour even after 23 years on the job. He was among several dozen union workers trying to get inside the hotel to deliver a petition for better wages for people who work for vendors to U.S. carriers.

“We are just asking, let us have some, a nickel a ticket off each ticket,” Garvey told me, as he reviewed for me the cost of living in Miami and explained why a $500 weekly paycheck is not enough to make ends meet. Garvey, and his fellow demonstrators don't work for the airlines directly but for sub contractors. “They say the airlines will take care of us, but its not true,” Garvey said and he’s right.

“It’s a much more difficult question,” admitted Doug Parker, American’s CEO when I asked him about the dilemma on Tuesday afternoon.  When it comes to vendors, “those are always competitively bid.”

“Look, I have some sympathy for those same issues and we are very conscious that when we make vendor choices we make choices that employ people and are good to people,” Parker said. Still, this attenuated relationship with the people who work airside provides the airlines with a way to avoid responsibility for the salaries and working conditions. Yet Parker correctly reminds me they are represented by a union.

It was UniteNow that brought Garvey and the others to the hotel where the world's  airline executives are gathered. And inside those executives were toasting their recent, happy financial situation. The have every reason to be magnanimous though its anyone’s guess whether they will be. 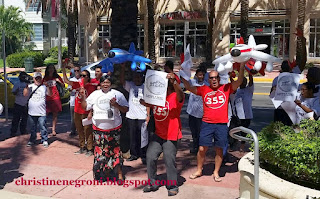 For his part, the CEO of the world’s largest airline suggests the issues raised by the low level workers of airline subcontractors' deserve attention. “I have some compassion and I believe those people will be seeing the higher pay because of the work they’re doing," Parker said.  "They need to look to their own labor contracts to look through that to their union contracts. Our obligation at American Airlines is to our employees.”

Posted by Christine Negroni at 5:56 PM