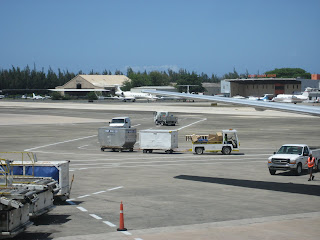 
If you think I’m overstating the case, view the coverage of the death of an unnamed Calgary airport worker on Monday. He died while de-icing a airliner, apparently falling to his death from the bucket of the de-icing equipment. The man worked for Servisair Canada, which provides an array of ground handling services to airports around the world.

Calgary International Airport spokeswoman Jody Moseley told The Canadian Press “It's a very unusual occurrence and a very tragic one." In fact, while it is indeed tragic, ground-based airport accidents are not unusual. They occur with startling frequency.
In November 2007, the U.S. General Accountability Office issued a report on ramp safety that showed in the five years previous, fatal airport ramp accidents were happening in the U.S. at a rate of six per year.

I’ve found no consolidated database tracking either worker injuries or damage to aircraft. The best I can come up with is a detailed spreadsheet, created by Bob Matthews from the FAA Office of Accident Investigation. Bob's numbers show from 1981 until May of this year there were 247 serious ramp safety events.
"My guess is that we've captured maybe 3 percent of the total events and probably 90 percent of serious events," he told me this afternoon.
I remember when I first heard about the problem, at a conference of the International Society of Air Safety Investigators in 2005. A member of the safety staff of Norway's Wideroe Airlines told me his airline was hard at work trying to reduce the number of accidents. After that I started paying more attention and saving and filing away the reports I heard about these kinds of accidents. Some of the thumbnail stories here, which are not inclusive, beg the question “Is enough being done to address this problem?”
• May 2009 - Miami International Airport - A worker loading baggage on an American Airlines B777 falls to his death.

• October 2008 - O’Hare International Airport - Three people are injured when a United Express SkyWest Airlines airplane collides with a Chicago Department of Aviation truck operating on the runway. The airport employee had to be cut from the truck.

• January 2008 - Hartsfield-Jackson International Airport - An airport lavatory service vehicle collides with a catering truck on the tarmac, killing the 19 year old driver of the lav truck.

• August 2007 - Raleigh Durham International Airport - The driver of an airport vehicle is killed in a collision with an American Eagle airplane.

• May 2007 - Newark Liberty International Airport – A worker is killed after being struck by a tail stand for an Eva Airlines Boeing 747.

• April 2007 - Detroit Metropolitan Airport - Two events in two days, one of them deadly. A ramp worker is struck by an airplane tug and killed. The driver of a de-icing truck flips the vehicle over. He is suspected of working while intoxicated.

• February 2006 - El Paso International Airport - Passengers on a Continental Airlines B737 are horrified to see a contract mechanic sucked into a jet engine while troubleshooting an oil leak.

• June 2005 — Reagan National Airport – The operator of a baggage loader gets lodged beneath a USAirways airplane and is killed.
• September 2003 — Norfolk International Airport - A tug operator gets pinned between the tug and the nose of a Northwest Airlines plane and is crushed to death.
• August 2001 — Reagan National Airport - A ramp agent walks into the propeller of a USAirways commuter plane at in Washington DC and is killed.
If injuries to airport workers and the threat to airline passengers weren’t enough of a concern, the commercial aviation industry ought to, at minimum, be motivated by the financial implications. Ground based airport events are second highest airline cost after fuel for many airlines around the world according to the International Air Transport Association.
IATA, which represents airlines and ground handling companies, estimates $4 billion is lost every year in damage to airplanes by baggage handlers, catering trucks and airport ramp vehicles. IATA warns that this number may vastly under represent number of dollars lost. Smacking a catering truck into a $50 million airplane can cause tremendous damage, putting the aircraft out of service for days or weeks. And the consequences can be even more dramatic.
In December 2005, a hole blew out of an Alaska Airlines flight causing a rapid decompression of the cabin at 26-thousand feet. Prior to the plane's departure from Seattle, an airport worker hit the side of the MD-80 airliner causing undiagnosed structural damage, which caused the rupture of the fuselage as the plane pressurized. Jeremy Hermanns, a passenger on the flight writes extensively about the experience on his blog.
While Hermanns and the rest of the passengers got the scare of their lives on Alaska Airlines Flight 536, it obviously could have been much worse. The danger is in diminishing the seriousness of the problem because the worst didn’t happen.
All of which is to say - as the Calgary airport’s spokeswoman suggests - that the death of an airport worker is a tragedy. But it is more than that. It is a symptom of a larger problem that should concern everyone who flies.
Posted by Christine Negroni at 10:24 AM

First of all, a very Happy Christmas to and your family.

I enjoyed reading the article, though I must take issue with the heading, 'The airport ramp is the most dangerous workplace in the world'. It is not even close. By far the most dangerous workplace is the flight deck of an aircraft carrier. That the accident rate on an aircraft carrier is miniscule compared to that of airport ramps lies in the selection and training of the participants and the rigid discipline that prevails on the flight deck. I spent 12 years as a navy pilot and can vouch firsthand for the amazing competencies that I saw in a work group the average age of which was a little over 21 years.

I subsequently became an airline pilot (25 years) and in that time, in addition to seeing many sensible, hardworking ramp workers, I also saw levels of stupidity, slothfulness, incompetence and dishonesty that defied imagination. Although the deaths or injuries of ramp workers are a personal tragedy they also represent serious gaps in selection and training of personnel, discipline on the ramp and a generally lax attitude supported, in many cases by unions and other supervisors.

It is easy for IATA and others to blame '...a dangerous workplace...', but the fact is that if the right people are doing to job, with the correct and enforceable procedures in place, the accident rate will diminish drastically and sensational headlines will no longer be necessary.

Thanks Robert for your comments.

As in all aviation events, no one act is solely responsible. Many factors contribute to the crisis of safety on airport ramps.

Having said that, a rampant disregard for the importance of proper employment screening, workplace training and safety procedures and respectful treatment of workers are all required for safe ramp operations.

You'll remember that prior to the 9-11 attacks airport security guards were barely screened and poorly trained. The annual employment turnover rate was between 100 and 200%. Their low hourly pay was illustration of how little regarded was their work. The professional-ization of air security following the attacks attempted to put the worker and the value of the job on the same level.

Until a similar attitude is adopted for the folks who work around hundred million dollar airliners the ramp safety rate will remain a problem.

I think we are saying pretty much the same thing. However, my comment was not about the differences between pre-, and post-9/11, but the use of emotive phrases that have little or no relevance. The use of such phrases is often used by those in authority to take the spotlight off the real problem and invoke sympathy for policy-makers.

'Baggage smashers' and others on the line are arguably now the lowest in the food chain and hence the most poorly educated, trained and compensated. Pre-9/11 the so-called 'security staff' were in the same position. We had to lose hundreds of people to violent deaths before those policy-makers decided enough was enough and invoked the type of security systems that should have been in place already.

Do we have to wait until there is a disaster on the line somewhere before we see competent, educated and well-trained ramp staff?

Regrettably, I think the answer is yes.

The pathetic failure of what should be a mature security system over the Christmas period and the weak response of the person responsible, as well as her master, have sent clear messages to the terrorist community, as well as the travelling public, that political correctness trumps a rigid, well-designed and implemented policy every time.

I don't think we should hope for anything more regarding operations on the ramp.

Work place injuries are a common reason behind personal injury claims . There is a huge number of employees who get injured during the course of their work and duty. Any employee who experiences injury that is an outcome of his or her employer's fault and negligence, he or she is entitled to a compensation claim for the afflicted injury. For this purpose, the injured employee needs to come into contact with an expert solicitor who will be able to assist the whole procedure in order to get a deserving amount of compensation claim. The personal injury lawyer is the one who after listening to you devises the whole plan based upon the proofs being provided to him in order to make your case presentable to the employer's insurers. Visit at Accidents At Work to get more information about this.

I agree with Jonathan that workplace injuries are quite common these days. Your post basically stated that the ramp is the most dangerous workplace. It's true that there are a lot of unreported accidents in airports.

My sister had been working for an airline company when she had an accident last year. Unfortunately, this was not immediately reported because the major consideration then was if the planes are damaged or if the passengers were inconvenienced. She consulted
injury lawyers Ottawa to file a legal complaint against her previous company. She filed for such because there was no immediate help for her hospitalization fees. Through the help of an
injury lawyer Ottawa, she was able to assert her right and get appropriate entitlements.