Jumbo-sized Bump and Grind at JFK 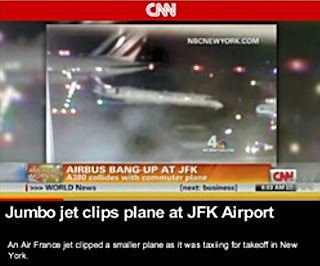 See the update on this subject  here and here

It's not a fair match when the world's largest passenger plane bumps into a tiny regional jet, which explains why people on the A380 that was Air France flight 7 felt only a slight dip when, on the departure taxi from JFK, the wing of the Airbus

hit the tail of the regional jet.
In the Delta Connection Bombardier CRJ700 that was also taxiing, it was a startlingly different story. At 500+ tons, the Airbus is 14 times the weight of the CRJ. The energy of the Airbus hitting the commuter, put the Comair in a 90 degree spin.  See the amazing video here.

I'll leave the news aspects of this story to others to report. What probably won't get reported elsewhere, is the record of on-the-ground safety events that occur so frequently and result in such expensive damage that ramp accidents are often the second highest cost to airlines after fuel according to the International Air Transport Association.
In a study for the International Civil Aviation Organization, the FAA's Bob Matthews, determined that failure to follow procedures and lack of training for ground workers are two critical factors in ramp events, and not surprisingly the two are related. When he wrote the report, back in 2004, he claimed that industry culture underlying ramp operations is part of the problem. Ramp workers were low-paid, employee turnover was high. As airlines felt the financial pinch of rising fuel costs, many began outsourcing their ramp operations losing direct control over what was going on around their airplanes.
Next month, in Montreal, ICAO will host a gathering of manufacturers, air navigators, airports and airlines  to talk about what progress has been made in improving ramp operations and what remains to be done. My money is on the lots to be done side.
But Monday night's Airbus versus CRJ bout, while one of thousands that occur each year, may be the just the bump and grind that prompts new attention to what it is and has been for too long, the most dangerous workplace.

It isn't likely to happen, but airlines ought to show that video to pax as part of the pre-flight brief and say, "THIS is why we say 'Remain seated with your seat-belts fastened until the Captain turns off the seatbelt sign'."

You are reading my mind Frank!

You have to wonder how big these airplanes can get before its impossible to see what you may hit.

Where are the wing walkers when you need them?