Sendai Airport Before, After and After Again

Before and after photos are a universal technique for showing what words can only attempt to convey and the official photograph of beautiful Sendai Airport in Miyagi Prefecture in northeast Japan is the classic "before".

It has been replaced in the minds of aviation aficionados by the heartbreaking image of "after"; after March 11, 2011, after the tsunami flooded the airfield, after it swept service equipment, airplanes and cars around like toys, after seawater raced through the terminal sending travelers and airport workers fleeing to the roof of the building.
The "after" photos, however are about to become tomorrow's "before" photos, once the cameras start clicking with the first arrivals at the newly re-opened Sendai Airport. Both JAL and ANA airlines will begin limited service from Tokyo's Haneda Airport. Both airlines' Boeing 737s will be sporting new paint jobs with messages of hope and encouragement.
The 9:30 flight of ANA #1502 will display - in English and in Japanese - this slogan:

While JAL's Flight 4721 will feature the message "Ganbarou Nippon" that JAL spokesperson Sze Hunn says means, "Be strong, Japan".  According to my friend, Takeo Aizawa it can also be translated to the cheekier "Cheer Up, Japan". 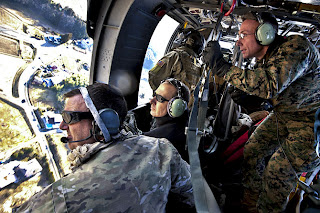 Officials say widespread cooperation among governments, citizens and other organizations enabled the airport to open sooner than originally expected. And really, that Sendai will accommodate half a dozen daily flights one month after such monumental destruction really is a remarkable testament to a lot of people moving forward as one if not necessarily cheerfully.
In the days after the earthquake and tsunami and after driving through freezing rain, American Air Force sergeant Michael Fletcher and a crew of soldiers from Kadena Air Base set up shop and bunks in the airport terminal building. Their first assignment was to turn a debris field into a landing zone into which badly needed supplies could be flown, according to accounts from the U.S. Department of Defense office of public affairs.
When the Americans got to the airfield they discovered the Japanese locals and members of the Self Defense Force had already done a lot of clearing. U.S. supplied electrical generators delivered the oomph of  powered equipment so that thirteen days after the earthquake, a C-130 Hercules was able to land, bringing the diesel fuel and other supplies requested by Makoto Kasamatsu, the Japanese colonel responsible for re-opening the airport.
"People were doing whatever was needed to get ready, regardless of their actual job," Sgt. Fletcher told the Air Force journalist, J.G. Buzanowski. "That first week, we were all working 18-hour shifts. But we knew we were helping people, so if we could have, we'd have worked 30-hour days."
An international, indefatigable esprit de corps seems to have developed around the task of rehabilitating Sendai Airport. Why, it could almost be described as cheery.  It seems unimaginable.
Welcome to after.
Posted by Christine Negroni at 9:49 PM