Saturday night I attended a “meet the congressman” gathering at the Greenwich home of Chicken Soup for the Soul publisher Amy Newmark and her husband Bill Rouhana. Amy was quite specific that this was to be a bi-partisian event to meet Congressman Jim Himes - though checks for the freshman’s lawmaker’s upcoming re-election bid would not be unwelcome.
This was my first opportunity to meet Jim Himes and I was impressed with his willingness to hear what was on the minds of his constituents. Unlike many politicians, he listened far more than he talked. Toward the end of the gathering he spoke for about 10 minutes.
In the interest of full disclosure, last spring, Cong. Himes sent a letter to the White House on my behalf when I was a potential nominee to the National Transportation Safety Board. But he already had my vote, because he is in the right place on so many national issues.
A question about the BP oil spill in the Gulf of Mexico launched a conversation about America’s oil dependence. Himes suggested our well-established taste for foreign oil, specifically Saudi Arabia’s, is unwise. He said that while artificially depressing energy prices seems like a good idea, it has the negative effect of removing incentives to conserve or create innovative alternatives to oil. 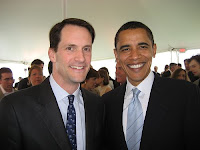 Himes, speaking in affluent backcountry Greenwich did not hesitate to tell folks whose children attend one of the finest public school systems in the nation, that more attention needs to be paid to education in other American cities and towns, including more federal funding for programs that encourage local school districts to improve.
Between mortgage and banking scandals, health insurance reform, military conflicts and environmental and safety catastrophes these reforms have been sidelined.

I remember clearly Inauguration day 2009. My husband and I and our two younger children waited in the cold on the Washington mall connected via cell phone to our two college-aged kids as Barak Obama took the oath of office. The presidential race was their first opportunity to vote so it was a heady, emotional, hopeful event for our whole family and  many others.
Since then, our country has lurched from one national catastrophe to another and I am losing my optimism. That is why I was so impressed listening to this young, first-time congressman. Himes was confident enough to be frank - admitting that the process will be difficult and unpleasant. With his assessment of how hard it will be he has reinvigorated my belief that the change so many of us voted for in 2008, is achievable.
Posted by Christine Negroni at 12:23 PM