Airline passengers and tumbleweeds in the airport of the future 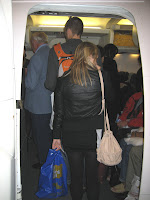 Early on in my career as an aviation writer, I was amused by the insider characterization of airline passengers as “self-loading cargo” This was years ago, okay, maybe people were no longer dressing up for a flight, and meals were still being served - even on domestic routes - but this less than adoring view of passengers was in my estimation still far in the future.
Well ladies and gentlemen, the future is now.

Today I received a press release from SITA, the information technology company that focuses on providing the computer support that enables travelers to not only load themselves on the aircraft, but buy their own tickets, print their own boarding passes, check their own luggage and take responsibility for everything short of flying the airplane.

“The airlines stated ambition is to reduce the number of passengers processed via agent check-in from 50.7% to 28.9% by 2013.” Checking in by airport Kiosk will remain at “just below 20%.” Web check-in will grow from one passenger in five today to one in three, three years from now, but the biggest movement to will be checking in via mobile phones. Twenty-eight percent do it today, 70% will by 2013, according to the survey conducted by SITA and Airline Business on trends in IT.

I’m pretty sure that there’s an entire field of psychology devoted to why some people use automated services and others prefer to be assisted by a real live human. But when it comes to the chaos at the gate when a flight is canceled or delayed, I don’t think there’s a passenger alive who wouldn’t be thrilled with the notion of having a kiosk handy to rebook them on the next plane when their flight is interrupted.

It wasn’t clear just how many airlines are involved in this “graduated move to new functionality” (Hey, I didn’t write it, I’m just reporting it!) and it’s the kind of statement that raises more questions than it answers. But that’s the kind of technology that fits right into the gee-whiz department. It’s downright next-gen, if you ask me.

I’m getting an image of the airport of the future filled with passengers and not an airline worker to be found. Oh, wait a minute; there they are, out on the ramp moving onto the airplane, all that cargo that isn’t self loading.

Uh . . . yeah. As a seasoned traveller I've seen just how efficient these "Kiosks" are. About as efficient as the automated choices are on your typical Big Company phone menu.

Just as I read that the automated checkout at grocery stores are being "phased out" due to more employees' actually having to help the self-service customers than actual "real" service customers, I think kiosks in airports are an idea whose time has finally gone.

I ignore anything automated or convenient or anything that even smacks of "in order to serve you better."