Pilot arrested with child pornography, does it get any worse? 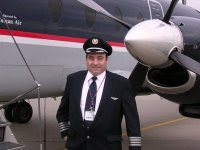 An airline pilot in Texas has been arrested for possession and distribution of “millions and millions of images” of child pornography including photos and videos of children being sexually abused and in bondage, authorities said.

Todd Ewanko, 46, a captain with Colgan Airlines,  (seen here in his Facebook profile photo) which does regional flying for Continental Airlines,  and many others, reportedly had the largest collection of child pornography ever seen in Harris County according to Sgt. Gary Spurger of the internet crimes against children task force of the Harris County Precinct 4 Constable's Office.

“Some of them are extreme. They are disturbing,” Sgt. Spurger told me of the images. He said some of the children were younger than 10.

There are a number of reasons why it’s even more troubling if a pilot is involved in this kind of repulsive criminal activity and Sgt. Spurger hit one of them right on the head. He said he was looking into whether Mr. Ewanko, used his ability to travel to facilitate his activities.

“We’re looking at his flight records to see where he has been spending the bulk of his time,” Sgt. Spurger told me.

As a pilot and a member of the Air Line Pilots Association, Mr. Ewanko could have flown jump seat on a number of international carriers to places known for trading in child pornography; Thailand, Malaysia, Taiwan and the Philippines come to mind, but of course there are others. Many countries have no laws against child pornography according to the International Center for Missing and Exploited Children.

In his years helping authorities investigate child pornography, Mr. Townsend says he has learned about the "psyche" of users of this material. "When people get into this stuff, they start out just checking it out. It escalates into trading pictures and movies, they start viewing younger and younger kids and go back and forth between boys and girls. There's a plateau they hit where they've done as much as they can sitting behind their computer and then they want to experience it first hand."

So this is an area that the authorities in Texas are looking into. Colgan Airlines has been cooperating with the investigation. In an email, Joe Williams, director of corporate communications for Pinnacle Airlines confirmed that  the airline was helping authorities and that Mr. Ewanko had been terminated. Mr. Williams wrote, "We have no evidence that the suspect used company computer equipment" for child pornography.

Use of child pornography by a pilot would render that person unsuitable for an holding an air transport pilot certification as it could indicate psychological impairment, Alison Duquette, a spokeswoman for the Federal Aviation Administration told me. Presuming Mr. Ewanko is released from jail, where he is presently being held on $600,000 bond,  whether he will be allowed to fly will be up to his airline under agreements Colgan has with its unionized pilots she said.

Mr. Ewanko’s arrest is more bad news for airline pilots who have been criticized of late for a decline in professionalism. In three major accidents since 2004, lapses in cockpit behavior were cited by investigators as contributing to accidents. 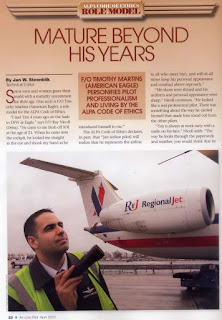 The pilots of Colgan Airlines flight 3407 that crashed in Buffalo, New York exhibited bad piloting skills and violated sterile cockpit rules. In addition the first officer sent text messages from the flight deck prior to the crash.

At a three day hearing in May members of the National Transportation Safety Board also discussed the pilots of Northwest Airlines flight 188 who were so distracted working on their personal laptops that they overflew the Minneapolis airport and were out of communication with controllers for more than an hour in October 2009.

Whether major events, or embarrassing gaffes, its no wonder airline pilots are feeling sheepish these days. At ALPA, one effort to restore the reputation of it's 53,000 members was sabotaged in house when Timothy Martins, an American Eagle pilot selected to be featured as an example of professionalism turned out to have fabricated most of the details of his life. You can read about that here.

“I wish the airlines would make It attractive to attract the best and the brightest,” one airline pilot told me this afternoon as we talked over the strange cases of Capt. Ewanko and First Officer Martins.
“Once people were attracted to a high caliber career but now it’s all a race to the bottom.”

Its hard to imagine a public relations bashing worse than this one. Perhaps the old blues song best sums it up,  "Been down so long, it looks like up to me."

That's not how Tony Kerns sees it though. A former Air Force pilot and human factors expert who runs the consulting firm Convergent Performance, Mr. Kerns says that even though all headlines mentioning pilots seem to be bad these days, it could be a positive thing.  "That's not indicative of 100,000 pilots and air traffic controllers doing it right," he told me.  "But it doesn't matter. Its another opportunity to hold the mirror up and say, 'Let's get better from here.'"
Posted by Christine Negroni at 3:15 PM

In any sufficiently large population, whether it be air line pilots or middle school teachers or clergy, there will be individuals exhibiting aberrant behavior. Absent the revelation of a pattern of pedophiles flocking to air line jobs to take advantage of the free travel to Thailand, it may be premature to engage in much hand-wringing over the present case.

Fools and perverts have always been with us - they just never got the instant notoriety that accrues to them today.

Frank,
You are not alone in that sentiment. In my interview with Tony Kern he made the same point. "Piloting, just like every other industry pulls from society in general. Even in the days when I was a nuclear bomber pilot and we screened in far more detail than commercial pilots, people slip through the cracks. It is not realistic to think any evaluation system is going to catch something when people go to level of detail to hide it. We find arsonists in fire departments, child molesters in coaching, unfortunately our society doesn’t have an answer for that as far as screening goes."

Christine,
What is your source on this story? In a quick news search I couldn't find anything about it. It seems like catching a scumbag this big would make the national news.

What can I say? You read it here first. Sometimes that happens. But I agree with you, it seems like big news to me, too.