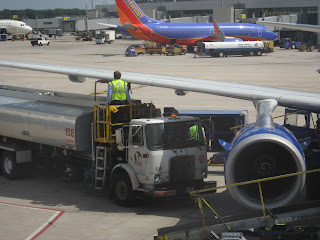 How much did Southwest Airlines covet access to the traffic-rich airports in Atlanta and New York? Enough to offer AirTran Airways more than $7 a share for stock selling at $4.5, that's how much.

In an offer with an estimated  price of $1.4 billion, Southwest Airlines will acquire AirTran, the heads of both airlines announced Monday morning.
"This is an industry that's fraught with risk,"  AirTran boss Robert Fornaro said, explaining why he thought AirTran shareholders were likely to accept the proposal. Fornaro characterized the Southwest offer as a rare "sure thing" in the industry.
We're a pretty scrappy company and we've done a lot with very little in a lot of ways," he said, describing his Orlando-based airline and its fleet of 138 Boeing 717s as having played the game hard. "Its not just staying in the game, you want to win," Fornaro said. By accepting Southwest's offer, "this company would be in a better position and eight thousand people would get the benefit."
Fornaro's poignant comments were a small part of the news conference. The announcement was dominated by Southwest C.E.O. Gary Kelly who could barely contain his glee.  He has reason to be delighted. The acquisition will increase the size of the low-cost-carrier by 25%, adding 37 destinations to Southwest's route map including the desirable Hartsfield-Jackson Atlanta International Airport.

But perhaps the sexiest aspect of the deal is that it will elevate Southwest to the status of international carrier, with AirTran's destinations in Mexico, the Dominican Republic and Aruba. While in New York to speak to the Wings Club last year Kelly spoke to me of his desire to make the airline more cosmopolitan.  At that time, he would have accomplished those flights with code-share arrangements. Assuming the deal with AirTran is approved, Southwest can fly the routes with AirTran's international operating certificate.

So its no wonder that Gary Kelly is grinnin' like a country bear.  "Near international service is number one and a natural evolution from the service we've developed," he told reporters.

Lest anyone accuse Southwest of blindly following the lead of Delta/Northwest and United/Continental by proposing to marry AirTran, Kelly explains, "its a brutally competitive industry. To the extent that we have competition that is getting better or getting bigger, we have to think about that and think about how we respond. We both know we can create a stronger company by combining than we can as independent companies."

"I don't know where else in the United States Southwest could have grown," said Robert Herbst, who follows airline finances at www.Airlinefinancials.com. Bob says the purchase of AirTran is great news for the industry and great news for Atlanta where he expects Southwest will start giving Delta Air Lines some competition.

"Southwest will go into Atlanta with a lot more destinations and a lot more gates. Southwest has the money and the balance sheet to go into a fight," he told me.
"I've got to give Gary credit for seeing what was happening here," Bob said explaining  that in getting AirTran, Southwest has eliminated a potent low-cost competitor.  When it comes to ticket prices, "AirTran is considerably lower than Southwest. Looking into the future AirTran was really going to create financial problems for Southwest."
Bob Herbst is among those who believe the rock-bottom airfares so popular with air travelers are the shoals on which the industry is capsizing, which is why he's enthusiastic about the deal while predicting it will create higher priced airline tickets.

In the meantime, Kelly is assuring his customers that the airline still plans to offer free checked bags and one-class cabins while AirTran's 717s will be incorporated into Southwest's all B737 fleet.

Posted by Christine Negroni at 10:40 AM