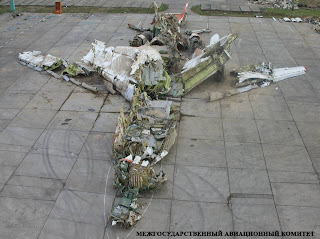 The headlines are already out there, attributing to pilot error the April 10, 2010 crash in Russia of the Tupolev 154 carrying Polish President Lech Kaczynski his wife and 94 others. Certainly there's much to suggest that the captain of the flight didn't exercise the best judgment in choosing to continue into the Smolensk airport which air traffic controllers and other pilots had described as foggy and unsuitable for landing.

In a news conference today, Tatyana Anodina, the chief of the Russian Interstate Aviation Committee  said the crew of the presidential plane could have avoided the crash by opting to land at another airport.

Despite warnings, Ms. Anodina said, "the crew of the Tu-154 did not take a decision to switch to a backup airfield."
There were many errors in the cockpit, terrain warnings unheeded, crew communication not made, extra people present, which speaks to what the Russians say was a contributing factor in the accident.
"The presence of senior officials – the Polish Air Force Commander and the chief of protocol – in the cockpit, and the likely negative reaction of the number one passenger – put psychological pressure on the crew."
Its important for everyone trying to make sense of the disaster that devastated a nation to understand that throwing all the responsibility onto the shoulders of this one pilot does little to provide lessons for every other pilot who will one day feel seduced by get-home-itius, or accommodate-the-very-important-passenger-itius.  The English language translation of the Russian report describes the pilots likely response to the pressure atmosphere on the flight deck as a psychological clash of motives.
The brother of the late Polish president Jaroslaw Kaczynski told reporters today the Russian investigators have made "a mockery of Poland," for failing to include points the government made in its 150 page response to the Russian report.  But if Poland and Russia square off in a round of finger pointing and a parsing of fault, it will be air safety - the mission of investigations after all - that will be most deeply mocked.
Posted by Christine Negroni at 6:20 PM

Comments deleted? So sad! Did not expect that from you Christine!!!

There is a great deal that can be learned from the tragedy of the Polish flown Russian transport on its way to the ceremony for thousands of Polish officers and soldiers who died at the hands of Russians.

The Russian report appears to be factual and, given the political blowback that was virtually guaranteed, it was courageous and generally without gratuitous ‘slaps’. Indeed, the Russians even gave a draft of it to the Poles for review prior to release.

I believe we can look on the Polish reaction as demagogic and meant for a mourning nation. That does not excuse it; but perhaps it explains it to some degree.

I agree that one pilot cannot be blamed alone. We don’t know what happened in the cockpit. The Chief of the General Staff may have been drunk; he was in the cockpit and found to have a high blood alcohol content. He may have even pushed the yoke. Almost anything could have happened; it was a more than perfect storm of emotions, political influence, inappropriate command and control by non-pilots (we can strongly suppose), a history of an international tragedy – and finally a resultant tragedy again.

But there is a reason that we are taught that the ultimate responsibility for the safety of the passengers in a plane we may be flying rests with us, the pilot (or the pilots) and usually with the senior pilot or captain. There is a reason for this. Without that level of final authority, too many decisions would become irrelevant due to the rapidity of flight vs the time required for discussion.

In that sense, all of us pilots must again resolve to take our responsibility to heart and resist the siren song of entreaties that abuse our common sense and even forced efforts, if they occur, to influence our flight decisions.

Ed, remember that these pilots had people breathing down their neck who were their superiors, who could with a single word ruin their careers, people who could (at least until recently, I think Poland's different now) have them shot without trial for any reason whatsoever or no reason at all.

If you were a pilot in such conditions, would you tell those people that you were diverting because of weather conditions when explicitly told not to by those people, when doing so would be considered severe subordination and cowardice, disobeying a direct order?

All reports indicate that's exactly what happened, the pilots of the aircraft being more afraid of the people in back being late for their party than they were of the possibility of crashing.
And now, predictably, the official report on the crash blames them solely for what happened, as is so often the case (and not just in Russia, but all over the place including the EU and USA, albeit for different reasons).