I had to laugh at something American Airlines executive Tom Horton said at the news conference last week announcing the new relationship between American and Japan Airlines. I even started to wonder if American's bosses were taking one of those get-in-touch-with-your-authentic-self courses.

In announcing that under the new joint operating alliance American and JAL would be looking to improve efficiencies in fleet planning, purchasing and maintenance, Horton said, "we've already learned a great deal from each other," before - in amusing understatement - telling the assembled reporters that JAL had a lot to offer on the subject of customer service. Yes, Mr. Horton, that would be correct. 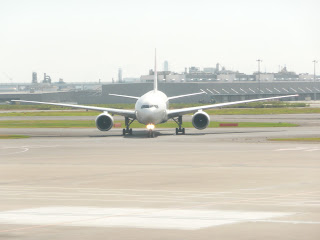 I've written already about the exceptionally agreeable reception visitors receive in Japan. And I'm far from the first to try and explain why airline workers in the United States are so cranky these days. But the Japanese must have the secret to making their customers feel welcome because despite their problems, JAL makes it work -- front side at least and for the passengers, that is where it counts.
When it filed for bankruptcy one year ago today (uh, Happy Anniversary?) the airline was twenty-five b-for-billion dollars in debt. The restructuring required among other things, a reduction in workforce equal to a third of its employees. The poor airline found itself in another pickle when aviation authorities determined that seats being provided to JAL by the Yokohama-based Koito Industries, might not meet crashworthiness standards. You can read more about that scandal here. But all you need to know for now is that JAL and other airlines had planes without seats and seats in some airplanes that could not fly.  So there were troubles aplenty for the carrier.
It is possible, nay, probable that when no one is looking JAL workers are irritably chain-smoking and just as grouchy as their foreign counter-parts. In the presence of the customer however, and this is the huge, monumental, truth - please take notice! - the customer encounters  only smiling faces, offers of assistance and the occasional seemingly heart-felt bow. American seems to be listening, Delta? USAirways? United? Are you?
There are all sorts of  strategic reasons for airline alliances: Coordination of ticketing and fares, routes with a high percentage of premium class travelers and of course this one keeps JAL in the Oneworld Alliance.  But I like to think its a nice marriage of yin and yang.
JAL, strong on people skills but weak on how to actually make money, has thrown its lot with American, which has been aggressive in cutting excess and pursuing new revenue streams, but honestly, customer service is not American's strong point. 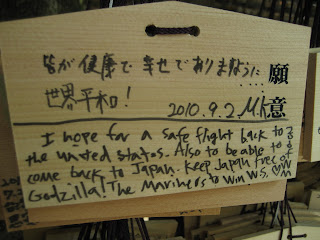 Last fall I flew several times on JAL, mingling with JAL employees and touring the JAL Safety Promotion Center. OK, this safety center. What does it say about an airline, that it would preserve, catalog and display the wreckage of JAL Flight 123

, the deadliest single airplane crash in history? Well, I think it says, that this is an extraordinarily conscientious airline. And I hope that whatever it is they're brewing in the tea at JAL's employee break room, the folks in human resources at American decide to "have what they're having".
Posted by Christine Negroni at 11:19 PM