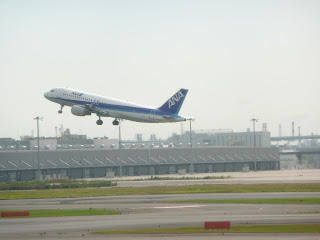 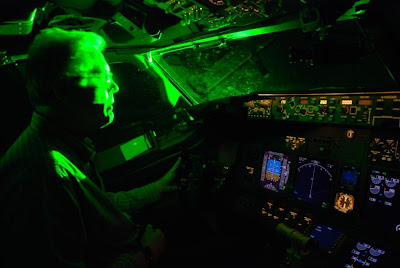 The FAA has been involved in a publicity campaign of sorts with Administrator Randy Babbitt blogging about the problem on the DOT's website and Ian is speaking to various community groups and that sort of thing.
"We think if we get the word out that there's nothing amusing, funny or humorous about pointing a laser at an aircraft," Ian told me on the phone last night, that will make the point, he said, adding that people caught can face criminal penalties.
Laser events are not confined to airliners. General aviation and helicopter operators have reported problems. Nor is this an American phenomenon. The laser fad is international. My friend and regular blog commentator Jorg Handwerg a German pilot was dealing with a rash of laser events the last time we were together in the Fall.
The third contributing factor comes from Samuel Goldwasser an engineer and laser specialist who gave me the Laser 101 last night, referring me to principals "you remember learning in Physics." (I do?) Despite his PhD, Goldwasser told me in 100% jargon-free English, “The cost of green laser pointers has dropped to the point where almost any nutcase can buy one.”
"Calling these 'attacks' is probably too strong. Most are idiots having fun, not realizing the potential for catastrophic results," Dr. Goldwasser said.
The real question is why does anyone do this? From my cruising around the online laser-loving community I note enthusiasm for two activities, do-it-yourself modifications to increase the power of lasers, and interest in taking these devices out for a spin.
From this I conclude trying to hit an airplane is unlikely to involve malevolent intent. Because, call me an optimist, I just can’t imagine that there are thousands of people out there who want to cause an airplane crash.   But if news stories, blogging or even the arrest of laserists caught red (green) handed don't penetrate the fog of obliviousness surrounding this new age target practice,  disaster is a real possibility.
Posted by Unknown at 1:17 PM