Lasers and Helicopters a Disaster in the Making 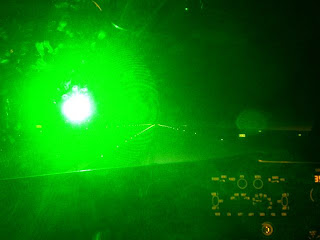 Negroni predicts this could end in tears.
I'm talking about an episode in Los Angeles earlier this week in which a local police helicopter was hit with a laser wielded by a 14-year old child. Last month the Federal Aviation Administration released a report showing that airplanes are targeted by lasers in Los Angeles more than any other municipality in the United States. But this is a world wide problem.
If it doesn't immediately come to mind why shooting a beam of highly focused light into the cockpit of a commercial airliner is a threat to safety, you can read more in the story I wrote on the subject for The New York Times by clicking here. But what has so far not been addressed and I fear may get lost in all the attention paid to the big guys, is the other dangerous situation. How else to describe the environment in which police find themselves night after night when they go out searching for these laser attackers? 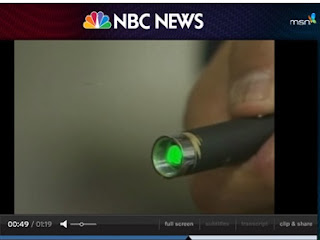 Public safety helicopters fly into neighborhoods where lasers have been spotted and essentially act as bait, according to Steve Robertson, the chief pilot for the Glendale-Burbank Police Department's joint air support unit. Over the past two years, the attacks have been relentless, Sgt. Robertson said, pointing out "Our aircraft have been struck 16 times," in the past fourteen months.
Sgt. Robertson surely believes in what he does. What other reason would he have to get up there so often, even after having been been temporarily blinded by a laser attack in the 1990s. "Their actions could have devastating effect," he told me. Devastating certainly if an airliner on approach or takeoff was to crash due to the unexpected incapacitation or distraction of the pilots on the flight deck. But in this potentially deadly game, airliners are not the only aircraft at risk. 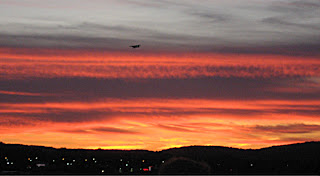 In fact, I'd say that helicopters pilots chasing lasers might actually be in more danger. While an airline pilot can be temporarily blinded by the extreme light of a laser, the beam itself won't directly hit the pilots' eyes as it is coming from below. Further, there are two pilots in the cockpit and in most cases the plane is on auto pilot/auto land. None of this is to diminish the critical role of the airline pilot, but it is a very different experience in the helicopter.

A helicopter cockpit has glass extending below the level of the pilots' eyes toward the ground exactly where the lasers are. Rotor craft fly at low altitudes over residential areas and busy highways. They are not flying autopilot and they may be piloted by a single person. They hover and may make inviting targets. That was the case on Tuesday when a Los Angeles television station sent its chopper to follow and report on the police activity and it was hit by a laser.

Any public service agency conducting these tracking operations and the news organizations that follow them, must be fully up-to-date on the capabilities of lasers and have a well-thought-out plan for how to fly safely in this threat. For the pilots and for the communities over which they fly the margin of safety must be much, much broader than the beam of light they chase.
Posted by Christine Negroni at 11:18 AM

as true as it is that helicopters are even better to hit (they are slower and fly at a lower altitude), it is not true that you can't hit the pilots of an airliner. First of all the pitch attitude is not that high during approach, that you can't hit the windows, especially if you stand on high grounds. Second if you hit the window (which you can achieve from the side as well), the light partly diffuses and illuminates the entire cockpit within a split second, like a flash. You don't have to hit the eye directly to blind a person. Third if you see a light in the dark the natural reflex is to look to the point the light comes from, which could lead to a pretty direct hit into your eyes.

Lasers are an increasing problem. We demand that the possession of powerfull lasers is forbidden. In Germany you even only get sentenced if you actually endanger the plane, not just for trying to do so. That needs to be changed as well.