Funny Even if it is So "Fecking" True 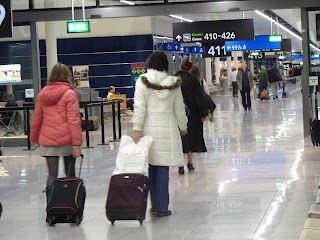 Knowing I have little tolerance for grumbling airline passengers who don't yet get it that there's no such thing as a free lunch, my dear friend Ira Rimson sent a very funny link to me today. The Irish/Scottish (Lord, I can't tell!) singing story-tellers featured in this music video have had an epiphany.

Cheap flights, cheap flights, I think you must agree
That only fecking gopshites think there's flights for fifty p.


In contrast to the spirit of United Breaks Guitars these dissatisfied air travelers stopped short of naming the company that brought them to this realization, but I'm betting it is Ryanair, the company everyone loves to hate. Not only has Ryanair practically patented the low, low, fair bait-and-switch, its I-love-to-get-a-stick-in-the-pail-and-stir-things-up boss Michael O'Leary has actually promoted a pay-to-pee-plan which can be the only explanation for the otherwise incomprehensible phrase in the song, "pay to use the jacks".


I know you're eager to view this hilarious video, but before you go, let me add the garnish that will I hope, enhance your appreciation for the ladies' tragicomic saga.

In Spain last month, the State Agency for Air Safety, AESA put its foot down on Ryanair after it refused to allow a family of four to board a flight from Malaga to Valenca last summer when Caroline Martín Gámez could not produce a passport for her 18-month old. Never mind that the toddler was not required to have this document.

I'd say that the Gámez family got the last laugh, in that Ryanair was ordered to pay a one-thousand euro fine. But that's small recompense for forfeiting already purchased airline tickets and having to transport young children by car on an eight hour trip. As I mentioned in a previous post, small fines are unlikely to get bad boys to change their ways.

If something else needs changing, though, its passenger expectations that cheap flights are anything more than a gimmick to get them and their wallets into an environment where it will cost plenty to get out. But I'll let the ladies tell you that story.


Posted by Christine Negroni at 1:38 PM

The singers are Irish and, yes, they're singing the Ryanair...

Everyone hates Ryanair and slowly across Europe the worms are turning. Several airports have refused to renew their subsidies to the airline and O'Leary has thrown his teddy out of his pram, taken his aeroplane and gone home.

Ryanair uses second and third level airports in areas that need the tourist business. Most of the time, the airline doesn't pay landing fees and actually gets paid to land.

They're not a low cost operator at all.

Yes - "the jacks" is an Irish slang for the washroom or toilet....