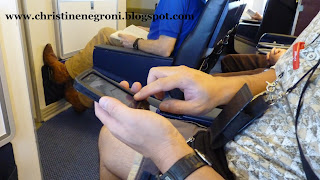 Kudos to ABC News for reporting on the problem of using handheld devices during flight. In his report on Thursday, Brian Ross took viewers into the EMI lab at Boeing, where engineer David Carson showed levels of electromagnetic interference from a Blackberry

, an iPhone and an iPad

that even the most blasé airline passenger might find startling.

Yesterday on my flight to Wellington, New Zealand where I have come to speak to the Australasian Society of Air Safety Investigators, I sat next to a man who was busy texting throughout the taxi and takeoff from Sydney Airport. Good thing I was exhausted so I could sleep instead of worrying. (What is it with the middle-aged men and texting?)
Along with a number of airlines I have flown since beginning my trip last week, Qantas takes seriously the use of portable electronic devices below ten-thousand feet - specifically warning passengers that their use can interfere with flight instruments.
John Travolta, looking snappy in his pilot gear, makes the seatback video safety plea. Maybe that's why the middle aged guy next to me, paid no heed. But when John's talkin' I'm listenin'!
Seriously, the information backing up the ABC news investigative report comes from the International Air Transport Association's STEADS database, a confidential reporting program into which 93% of the world's airlines contribute.
The database showed 75 events over the past seven years, but since only about a quarter of the world's airlines participate in STEADS now, its likely that many more instances of interference have occurred. (Read more here and here) One things for sure, the use of electronic devices is a problem passengers don't want to acknowledge.
Having flown around the world to meet with folks for whom aviation safety is a cause worth pursuing, its ironic that this safety issue is so troublesome considering it is one of the few that is literally in the hands of the people who most benefit, airline passengers.
Posted by Christine Negroni at 1:04 AM

Hi Christine,
the level of radiation emanating from a hand-held device can be a medical issue - currently under closer scrutiny - but I wonder if there is scientifical proof (beyond suspicion) that EMI can affect a state-of-the-art airliner. In fact, during a press visit to Airbus three years ago, a senior flight text executive confided to us that every trial intended to demonstrate EMI on their airliners from cellphones had showed nothing. In the course of their trials, a full passenger load activated each one's mobile at the same time and still no perceivable effect on the aircraft systems was recorded. So probably the airlines are merely buying time on the safe side. That said, I don't know how older-technology airliners would behave under the same conditions.
Best regards,
Javier A. Lifa
Buenos Aires, Argentina

In my humble opinion, it is time to either get serious about this matter, or let it go. If the threat to safety is real, and the interference with aircraft instrumentation and control is genuine, then the presence of this interference would have to be detectable by a device designed for that purpose. It could be hand held so the Flight Attendant can walk directly to the offending person / device, and take the appropriate action. Another option in the name of flight safety would be to prohibit these devices in the cabins of aircraft. Again, if the threat is real let’s not wait for action until we are mourning the loss of 130 people in the woods short of a runway. And if it is something else, then let’s stop the chatter and focus on important things.

Given that interference can come from outside as well as inside, it makes much more sense to me to shield the sensitive devices against EMI/RFI to begin with.

P.S. None of the links referring to the report in the first paragraph are valid.

I am a pilot and have worked as a captain at a regional airline flying regional jets and advanced turboprops. I am of the opinion that handsets do interfere with the pilot's job. I have on many occasions heard cell phones querying cell towers in my headset. I other words, I KNOW when there is a cell phone on in the plane... Though the headset does not go through the same testing as the rest of the system, it is enough evidence for me to want all non-essential EMI off the plane.
As so eloquently stated earlier, it is in the passenger's best interest yet they disregard the regulations. Shame on them.
I was involved in an emergency a number of years ago where we were making an emergency landing in Nashville. It was reported to me after we were down safe that there was a passenger on the phone while we were still in the air. Now, tell me this. IF they know there are not to be on the phone in flight and they know they are in an emergency situation, wouldn't they want the pilots to have all the tools necessary to conduct their job of getting the plane down safe. And if there is a remote possibility of a navigation needle having a faulty "wiggle" or a comm radio of having interference, why the heck are they on the phone? What is SO important?

The FAR 91.21 "no portable devices below 10k feet" announcement has a long history of almost 50 years. I've personally reviewed 20 different technical reports wrt subject. ALL have identified a potential for EMI problems. There is also data to suggest that at least two fatal B737 rudder rolls were due to an EMI susceptibility of the old analog yaw damper coupler. The NTSB's USAir 427 report even mentions it with footnote 235. The report is downloadable from ntsb.gov.

Thanks Paul for the warning about the links. They have been fixed. Thanks Doug for your comments here. Your experience is invaluable.
Christine

Not to be the lone dissenter but I have been flying the past 10 years and always carry my cell in the cockpit with no interference.

However, if we are talking about courtesy then yes, Please stop talking in a confined space like someone cares about what you are saying or texting. Let life go by for a few hours and drop off the net.

Shame on you Lone Dissenter.

a) For leaving your phone on. Shouldn't you be focused on your job of getting all the passengers entrusted to your care safely from A to B and not texting your wife asking what is for dinner?

b) For stating the fact that you leave your cell on during flight on this blog. As a pilot you are seen by the public as being a leader. What do you think they are going to do after reading your comment? They are all going to assume it is okay because a pilot does it.

Shame on you. I am extremely dissapointed.