Geeks Just Want to Have Fun - ISASI Down Under 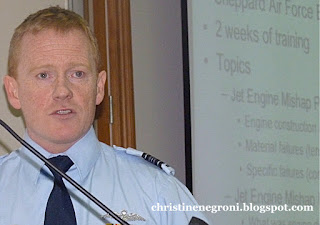 The Scottish transplant to the Royal New Zealand Air Force, Andy Cant, did the translating while the Kiwis shot comments and questions in my direction.  "How had I never heard of Peter Jackson?" "What were my plans in Blenheim?" "How did I like kumara?"
My daughter, Marian, a temporary resident of New Zealand and my companion at this dinner could have helped but she was on the wrong end of the table yucking it up with Lara Mansil from Qantas. OMG we were laughing so hard we were practically in tears. We were at the dinner banquet of the Australasian Society of Air Safety Investigators meeting in Wellington, New Zealand and clearly we’d chosen the right table. 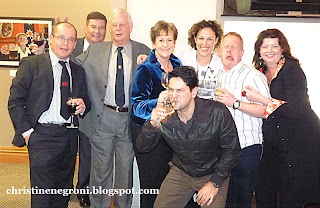 This is one of the things I love about attending the ISASI meetings. No matter where in the world they are held, no matter how technical (or controversial) the presentations, at the end of the day, when the cocktails are served and we settle in around the dinner table, there’s a easy course of conversation as we tackle the questions remaining from someone’s  presentation suggesting the application of a mathematical model of the chaos theory to aviation disasters to what we think of the fact that Pippa’s tush has its own Facebook page. Then of course there is the opportunity to try some local food.
At the Australia/New Zealand regional meeting held this weekend it was kumara, a hard, dry sweet potato that’s like a blend of turnip and salted yam. (It’s good, but it’s no Afghan biscuit. Why in the world is New Zealand not exporting this delicacy???)
I’d been one of about a dozen presenters, talking about human factors and asking the question, how much has applied psychology actually contributed to safer skies? The quick answer is, we don’t know for sure. But it took me 25 minutes to get there, so stand by, I’ll be blogging about this in more depth in the future.
The two papers I’d like to share with you, come from relative “outsiders” in the world of air safety, Rick Sellers, a consultant from New South Wales reminded the audience of the irreversible trend towards distraction in the work place and negative effects of interruption of tasks in aircraft maintenance.
“Who here would think it okay for a heart surgeon to be interrupted in the middle of an operation to take a phone call from her husband asking what he should pick up for dinner?” Rick asked. That’s a chuckle because it’s absurd. Look, even the flight deck has the concept of “sterile cockpit” where its accepted that non essential conversation is a distraction and a danger. But no such protection exists for airplane mechanics, Rick says, and it should.
Rick’s brilliant suggestion? Creating a block of time he calls a “focused maintenance environment” in which workers, identified with special vests, or working within a specially marked zone, are to be left alone.
When I’m on deadline I post a sign on the door to my office, “THINKING”, it says, “Don’t interrupt!”  I could transpose a word, or mix a metaphor. Frightening, yes, but how much more serious is the work of mechanics whose errors can have life-threatening consequences? 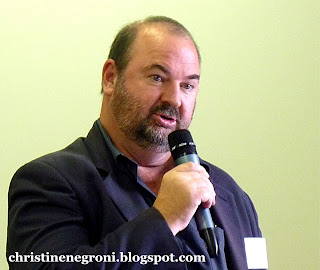 “The biggest challenge for human factors scientists,” Rick told the attendees, “is to take what they know and come out with practical tools people can use.”
Mechanics work in an environment rife with opportunities for error, conducting multiple tasks, parallel tasks in close proximity, and under time pressure. Sorting out these opportunities for error and creating tools to prevent task interruption  is as important for mechanics as it is for pilots.
Rick’s low-tech solution for the constantly challenging problem of human error was in contrast to the high-tech presentation made by Sam Watson, a 16 year old from Canberra. For a high-school science project, this young-engineer-in-the-making, decided to push what’s known about the deterioration of carbon fiber materials by applying lightening-like energy to carbon fibers in a lab. Sam studied how the carbon fibers broke down affecting the integrity of structures and creating health risks from the respiration of the microscopic particles.
As the mother of a couple of teen aged boys, I have to say I was dazzled by the sophistication of this young man’s research and his poise in presenting it to a room full of people who could and did ask the tough questions in the follow up.
For the ISASI, ESASI, and ASASI conference banquets to come, I'm predicting fights may break out among members eager to have Sam sit at their table.
POSTSCRIPT: 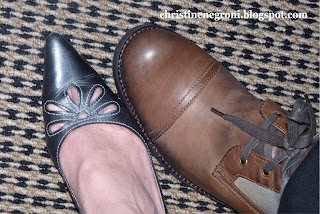 Kiwi women and American women have entirely different opinions
on the proper foot gear for a fancy dinner.
Posted by Christine Negroni at 6:32 PM

Thoroughly enjoyed the seminar. Kiwis (not the feathered kind) are known for their bizarre sense of fun and humour (btw I'm an Aussie!). If you don't believe me check out Air New Zealand's new safety demo: http://www.youtube.com/watch?feature=player_detailpage&v=3iaTEgoezNQ. If the link doesn't work, search youtube for "Mile-high madness with Richard Simmons".

Christine, we didn't mind that you wore boots.

Hi Christine, sorry I had to dive out without saying goodbye properly. Hope you did enjoys the rest of NZ! Cheers, Tony