That' was some big swingin' party at New York's 21 Club last night, as Etihad chief executive James Hogan - grin all over his face - confirmed what he'd spent the last few years promising anybody who would listen, the Abu Dhabi-based airline would end 2011 in the black. 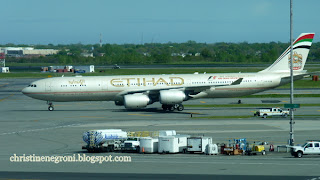 That the feisty upstart actually made money after spending it with significant abandon over the first 8 years of operation is certainly gratifying news to Hogan and his royal backers in the United Arab Emirates. It may be considered - correction - will be considered ominous to a lot of no-longer-fat-and happy-flag-carriers who keep insisting - correction - keep whining that the Gulf carriers don't play fair, as I reported for the International Herald Tribune last fall.
Whether they're right or wrong about what's fair doesn't really matter, the Gulf carriers are playing for keeps. This becomes even more obvious in light of today's news from Etihad that is beginning daily A340 service to Washington's Dulles International Airport. It is the latest play into legacy carrier territory after Etihad increased its ownership of airberlin to 29 percent just two months ago. 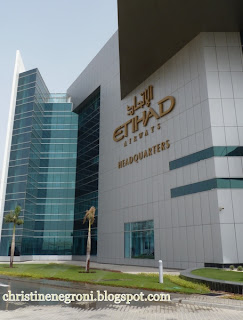 To recap: Etihad was started by Sheikh Khalifa bin Zayed Al Nahyan in 2003 and since then it has grown into an international carrier serving 84 destinations. Etihad is often paired up against the much larger and older Emirates, whose home base in Dubai is two hour's drive north. (Call me a rascal, but I confess, it's fun to watch Hogan's ears turn red when he hears the two airlines compared.)
Still, the UAE airlines employ similar business tactics, freely spending on airplanes, branding opportunities and new routes, and they benefit from similar advantages, a modern transportation infrastructure with gleaming new airports, straightforward hub and spoke systems and a location smack in the center of the booming travel markets in Asia, India and the Pacific. Then there is the storied reputation of both airlines for service, service, service.
Etihad, young and unencumbered by tradition is making the most of these assets, living into its identity as a scrappy parvenu to seize the opportunities. Many of its competitors appear paralyzed by the economic upheaval in the west and the whiplash-inducing shifting of the market eastward. I'm no sports fan but I'm glad I've got a front row seat for this match because it is Olympic-quality.
Posted by Christine Negroni at 2:40 PM

Indeed it is refreshing the legacy carriers of Europe who have played "un"fair in the region for years squirm at the mention of the GCC carriers. I guess it is slowly dawning that the center of aviation has shifted from Europe to the MENA region. And what they consider as upstart national carriers are out serving and out performing them.

Hi Oussama,
Turns out we are both wrong. The Etihad history from its website says the founder is Sheikh Khalifa bin Zayed Al Nahyan. Thanks for your always insightful comments.
Christine