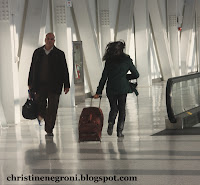 Once again documenting the ups and downs of aviation has me on the run. Was it April 2011, when I wrote, "I am living in fear. I am terrified of my inbox. The ringing of my telephone sounds like the dun-dun dun-dun soundtrack of Jaws."  Here we are 11 months later and the crescendo of  events is even more bizarre than last year.
Eclipsing the news in 2011 that nameless air traffic controllers were sleeping at their stations is Tuesday's story of a JetBlue airline captain who was locked out of the cockpit by his own first officer. On a flight from New York to Las Vegas the pilot identified by news accounts as Clayton Osbon began a rant that included all the words one is not supposed to say on an airplane, "bomb...Al Qaeda...say your prayers." Fast thinking on the part of the first officer, kept the captain from returning to the flight deck and passengers subdued Osbon who was clearly experiencing some serious mental impairment.
This story strikes me as terribly tragic and eerily reminiscent of what happened to a friend of mine - an experienced airline pilot. One night driving home from the airport on a route he had taken for 20 years, he found he did not know where he was. Later that week doctors found a tumor on his brain and shortly after that he was dead.
Who can say how much danger passengers were actually in on JetBlue Flight 191 but I fear for Capt. Osbon.
The JetBlue story, following so closely the case of the American Airlines flight attendant who started a terrifying rant on a flight out of Dallas earlier this month (and the case of a JetBlue flight attendant flying off the handle in 2010) surely means this latest episode will wend its way around the world faster than a speeding jumbo jet. 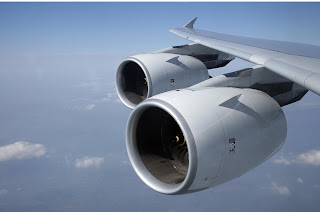 Which of course transports me to yet another big news story; Tuesday's emergency landing of a Singapore A380 running, you guessed it; Rolls Royce engines. (Honey if you feel you can't keep up with these incidents, take a number.) Flight 26 with 400+ passengers was 3 hours out of Changi when the crew initiated a precautionary shut down of the number 3 engine and turned back to the airport. 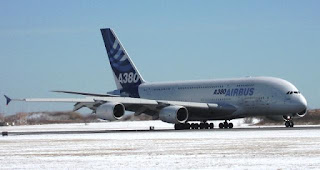 For the airlines operating the troublesome combination of A380 airframe and Trent 900 motors, the much-touted airliner has been like a difficult teenager, one problem after another.
That the flight headed for Frankfurt did not actually arrive there may have been the silver lining in this cloud. You mean you don't know? Well this is the same day that 445 flights were canceled at Frankfurt as unionized workers staged a warning strike intended to "warn" Fraport, the airport operator to cough up more than a 2% pay increase.
Labor may have the right idea here; When things get tough, initiate a "precautionary shutdown." Let me remind you this is just the news from today. If the news from the skies doesn't power down to idle soon, the next precautionary shutdown may be mine.
Posted by Christine Negroni at 11:33 PM

There is a general malaise in the industry that is starting to manifest itself in outbursts. All these productivity improvements touted by management are causing fatigue among crews. The same applies for maintenance and ground staff. every airline is basically undermanned, they will not admit it, but it is there. You see it at check in counters, at gates and among crews and technicians. There is very little or no investment in human capital. The new FAA duty time limits aimed at reducing fatigue and enhancing safety had the airlines and A4A up in arms. They looked at curtailing services rather than looking at required numbers.
I guess we will see more and more of these bizarre outbursts.

Thanks to age 60 at the time, I was retired from the left seat as a Check Captain. Ironically, one of my last First Officers was so confused on entering holding that I had to do it. He is still flying and I am not. Check the pilot age of all these incidents and accidents...different generation, different ethic, different mind-set on automation vs flying skills.

I am still flying BTW, but not with an airline. I am one of those pilots who actually enjoys flying and takes pride in the profession. Fatigue? It's been around for a long time. You just adapt.

Where did Capt.Clayton Osborn's "Grace" land?
Let us not forget it is the captain who saves lives of all passengers aboard his flight.
Cabin crew professionals?