In this attire, I was a magnet to people who wanted to talk about the airline. To a person they were enamored of Emirates. This was very strange to me, accustomed as I was to the general ire and discontent Western air travelers feel about the airline industry. Elsewhere in the world, there are airlines that people love, Love, LOVE. Dubai's Emirates and Etihad Airways based in Abu Dhabi are two such carriers.

That's what makes Etihad's new television commercial so interesting. It is a one minute, narration-free love song right back to its passengers where they live from Australia's beaches, to Bangkok's waterways, Abu Dhabi's deserts and Germany's wineries. Believe what you see and Etihad's passengers will find the beautiful sounds, foods and cultures of the world served up at 36,000 feet.

The world abounds with many delights
Magical sights, fanciful flights
And those who dream on beautiful nights
Dream of beautiful things.


If, say, United or Air France were to try this tactic, viewers would be hooting before Darin completed the first verse. But for airlines like Etihad, pitching the in flight experience is more important than so many other items on which airlines compete, or so I am told by Shashank Nigem, an airline marketing strategist and CEO of SimpliFlying, as I reported in today's APEX Editors Blog.

"By drawing parallels to the life of a business traveler on the ground, and amenities offered by Etihad Airways in the air, the ad demonstrates that a premium lifestyle is well catered to by the airline,"  Shashank said. "Etihad has done a good job of being subtle, yet clearly showcased its premium offerings." 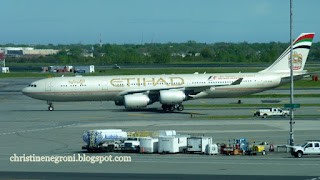 Etihad boss James Hogan told me earlier this week that the airline was pleased to be launching a global campaign; The ads will air on television stations in seven countries. But the message may not be for everyone, as Shashank observed. The concept of air travel as lux experience is part of the unrelenting race by airlines around the world to capture premium passengers.

In 2010 Etihad released a focused advertisement featuring its brand ambassador, Indian screen superstar Katrina Kaif. In a class-transcending music and dance routine, the airline hits all the right notes. If this airline or any other could deliver that kind of an airport experience to all its passengers, few would care where they sat on the airplane.

Posted by Christine Negroni at 1:11 PM

Outstanding commercial... and outstanding airline. My wife and I are US expats living in Abu Dhabi and we'd take Etihad for all our travel if we could. It really is that good.