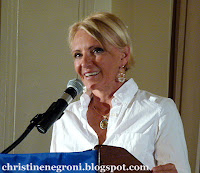 On Wednesday night, Wagstaff was dressed in low-key white button down blouse and (waaay less low-key) black leather pants to accept the Outstanding Aviator Award given by the club and the International Aviation Womens Association. The audience was both dazzled and slack-jawed as Wagstaff told stories of her adventures doing her signature multiple vertical snap rolls and otherwise "raging around" the world in her Extra 300S.


There was the time she said that air traffic controllers at Ezeiza Airport in Buenos Aires encouraged her to do a few improvised stunts over the field at the busy airport and as she was flying low she found herself "looking up at the cockpit of a 747." Then she told us about doing a hammerhead maneuver at a show in Iceland that had her staring down into the source of an erupting geyser.

From airport openings in Branson, Missouri to flying inverted up Russia's Volga River, her tales had all of us in the room holding our breath even safely seated on our upholstered chairs in the Yale Club's 20th floor function room.

Imagine how thrilling this woman can be when she's airborne.

"I see it as a big responsibility and take it seriously to inspire and expose people to aviation," she told me when I had a chance to interview her later. When I asked her if her antics helped younger extreme performers like Danica Patrick, she said certainly she and NASCAR's Patrick were busting old notions of women.

"You can still be a girly-girl and wear cute clothes and kick ass in the cockpit," she said. "I've seen a big change in that." When she first started flying on the US Aerobatic Team she told me men would say to her, "'You're fun and you're wearing earrings, you're different. We expected you to be masculine or bigger.' It jogs peoples' mental image of a competitive woman."

So when I write that this woman is down-to-earth, it is because, in spite of the fact that she is an adrenaline-charged, fearless and athletic performer who wears cute clothes and earrings in a mostly male world of precise showmanship, she can also slip her leather-clad legs under a table at a New York restaurant and dine with a group of women she's never seen before and fit in like just another one of the girls.

Yes, my fellow women in aviation are an impressive lot; engineers, pilots, lawyers, financiers and managers who have risen in a tough and macho industry.

But Patty takes on her challenges solo, relying on her own skill and talent. That amount of guts doesn't often come embodied in such a heck-of-a-nice-gal. In my mind that makes her deserving of last night's award and all the others she has now or will take away from her stellar flying career.

Posted by Christine Negroni at 6:47 PM